Maybe she'll have better luck than us in explaining this thing 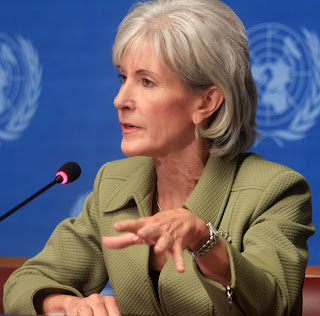 If you thought that a law written in secretive fashion by a combination of members of Congress, their respective staffs and health care and big Pharma lobbyists and which was cobbled together to provide enough aptly-named sweeteners (Cornhusker Kickback, the Louisiana Purchase, Gator Aid) to garner sufficient votes and which also was ramrodded sideways through no fewer than 3 congressional committees might experience some minor problems with its roll-out, you would not be alone.


Baucus, the chairman of the chamber's powerful Finance Committee and a key architect of the healthcare reform law, said he fears people do not understand how the law will work.

"I just see a huge train wreck coming down," he told Health and Human Services Secretary Kathleen Sebelius at a Wednesday hearing. "You and I have discussed this many times, and I don't see any results yet."

Baucus pressed Sebelius for details about how the Health Department will explain the law and raise awareness of its provisions, which are supposed to take effect in just a matter of months.

Remember, we were told by the glittering jewel of colossal ignorance, then-Speaker of the House, Nancy Pelosi, that we had to pass ObamaCare so we can find out what's in it. And now, over 3 years since its passage, the biggest problem the law faces according to those voted for it is that it has not been sufficiently explained to us. Never mind that Baucus, one of the chief architects of the law and who is facing re-election next year is in full CYA mode, the man has some valid concerns, and how!


He pressed Sebelius to explain how her department will overcome entrenched misunderstandings about what the healthcare law does.

"Small businesses have no idea what to do, what to expect," Baucus said.

Citing anecdotal evidence from small businesses in his home state, Baucus asked Sebelius for specifics about how it is measuring public understanding of the law.

"You need data. Do you have any data? You've never given me data. You only give me concepts, frankly," he said.

Sebelius said in response that the administration is not independently monitoring public awareness of specific provisions but will be embarking on an education campaign beginning this summer.

Of course they're not monitoring public awareness. a) it's the law of the land so all you little people can go pound sand and b) they wouldn't like the feedback so please see a). And about that education campaign... mere months... weeks? before people can start signing up for ObamaCare at the state exchanges (which are nowhere close to being set up, by the by) on October 1st? That ought to be helpful.

Later, the article takes a curious turn down the avenue of why it is that 3+ years later we still don't know jack squat about this law and it has to do with our obvious misconceptions regarding the law. Here is the odd stand-alone paragraph:


A recent Kaiser Family Foundation poll found deep and persistent misconceptions about the healthcare law. Public awareness was highest for the most politically unpopular provisions, and many people wrongly believed the law contains provisions like a "death panel" to make decisions about end-of-life care.

We suppose this represents part of the education campaign: getting The Hill to provide cover for this horrible law.


But if Sebelius and her water carriers in the press want us to give up our misconceptions regarding "death panels", we'd be glad to except for the fact that it's not really a misconception.

Nearly 4 years ago, we read the section of ObamaCare that dealt with the alleged death panels and came to the conclusion that though there were no death panels, per se, the language of the legislation allowed for a steering of patients towards decisions that would be, shall we say, less than optimal for their immediate health.

Here's us from back in 2009 and please follow the link for a fuller explanation of our thoughts on the matter:

Conclusion: First and foremost, this legislation, because of the Byzantine fashion in which it is written should be opposed on principle alone. Well, all legislation is written in that manner. Perhaps, but we all reserve the right to be smarter than we used to be and nothing this important should give someone a headache while trying to read it, let alone interpret it.

So while there does not appear to be a death panel, per se, the vague manner in which the language is crafted leaves plenty of wiggle room for physicians to steer patients towards decisions that would lead to a lessening of treatment(s), malnourishment, dehydration and a cutback on anti-biotics.

And if you believe, as we do, that government-managed healthcare will lead to shortages and thus the eventuality of rationing, one can connect the dots to see where this is all going.

Benefit of the doubt: Denied. We’ve heard too much already with respect to what the President himself has related as to the potential of rationing end-of-life care and the immutable laws of economics when it comes to who’s paying for what to let this slide.

The current healthcare reform bill as written, will indeed impose pressure on physicians and thus their patients into decisions that will not have their personal-health best interests at heart with specific respect to end-of-life decisions.

At the end of the day: Keep your politics off our body.

If you had trouble comprehending what was written above, our apologies as we were taking our best crack at deciphering and then explaining perhaps the un-decipherable. This is what Baucus fashioned and this is what Ms. Sebelius will have to explain, herself, to the rest of us this summer. Best of luck with that, Ms. Sebelius.

Nice post reminding us of what a turd of a piece of legislation this was. The ACA will get dismantled after years of pain; as Winston Churchill said, Americans always do the right thing, after exhausting all other options. Fortunately, the ACA is every bad idea rolled into one.

You were right then and correct now not to give the administration the benefit of the doubt.

Open it and produce another folder named
"Autoinstall" in it. Install Frash by tapping
Lookup and enter Frash as the lookup requirements. Following all, its newest handset was a massive
success.

An intriguing discussion is definitely worth comment.
I think that you should write more about this subject matter,
it might not be a taboo matter but typically people do not talk about such issues.
To the next! All the best!!

An impressive share! I have just forwarded this onto a co-worker who has been conducting a little homework on this.
And he in fact ordered me dinner simply because I found it
for him... lol. So let me reword this.... Thanks for the meal!!

But yeah, thanks for spending some time to talk about this issue here on your site.