Seeing the forest through the trees 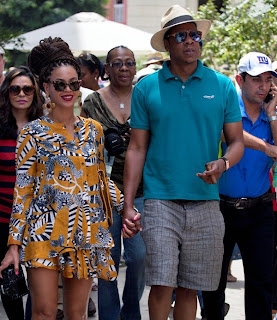 Other than the Kermit Gosnell murder trial this past week, the big news was music mogul Jay-Z and his wife Beyonce' visiting the authoritarian island state of Cuba.

It was dubbed a "cultural" visit by the Treasury Department who grants permission for such requests, although, part of the dust-up is whether he received some assistance from the White House of which he is reported to be on very good terms.

No matter. We've never been big fans of trade embargos or trade restrictions as they never appear to work. Closed, insular, police states appear only to become that much more so when denied the liberalizing influences of western democracies.

We're reasonably confident that part of this cultural visit did not entail Jay-Z and his lovely bride visiting any of Cuba's political prisoners languishing in that country's gulag. And since Jay-Z and the President are supposedly boys and since also the Commander-in-Chief has asserted the absurd notion that he has the right to assassinate U.S. citizens overseas without due process, we will call this trip for what it was: a mutual stoke-off photo-op between two like-minded regimes.


Addendum #1: from the comment section of the linked HuffPo piece, we are informed that perhaps the criticism leveled at Jay-Z and Beyonce is due to skin hue. Let the record show and do a word search to prove it that these pages have been exemplars regarding color-blindedness when it comes to calling out toadies, stoolies, apologists and otherwise useful idiots for the likes of the Castro regime, Hugo Chavez's Venezuela and Ahmedinejad's Iran.