Next, they came for the craft beer and you said nothing

Want to know how to goon up a perfectly good win-win situation for all participating parties? You get the federal government involved, that’s how.


The Food and Drug Administration (FDA) will now be regulating the spent grains from the brewing process because of pet food or something.

For centuries, brewers have given or sold the leftover grain from the brewing process to local ranchers and dairy farmers for cattle feed. But new regulations proposed by the Food and Drug Administration threaten to end that relationship.

"The whole brewing community was shocked about it," said Josh Deth, co-owner of Revolution Brewing in Chicago, Ill.
Deth, whose title is "Chairman of the Party," says it's always been a great deal for both sides. The ranchers get the grain, and the brewers get those leftovers removed from their facilities for free.

"We're trading, giving something of value to each other and working it out. I think that's one of the really great things, and people really hate to see the government get involved in something where they can just as easily stay out of this."

Under the FDA's proposed regulations, so-called spent grains would be regulated the same as pet food.


Deth said the regulations would make it far too costly for him to prepare the grains to be passed along to farmers. The only remaining option would be sending it to a landfill, which would cost more than $100,000 a year.

That would be bad for dairy and cattle farmers like Jim Minich, who gets 30 tons of spent grain from Revolution Brewing each week. Not only does the grain save him more than $100,000 a year in feed costs, his 750 cows also produce more milk after chowing down on their "happy hour."

"I mean it's just basically grain and it's got a lot of yeast in it and it's wet, so it adds to the palatability of the feed so they eat more," he said.

The regulations are part of the FDA's Food Safety Modernization Act, a sweeping new food safety reform law signed by President Obama in 2011. According to the FDA, the purpose of the law is to improve the safety of animal food.


And just like that, farmers like Minich will be adding $100,000/year to their operating costs and breweries like Revolution Brewing will be doing likewise all in the name of animal food safety?


In Placentia, California, this is known as a solution in search of a problem as the article readily explains.


There's no record of spent grains causing any problems for cows or humans, though, according to Chris Thorne, a spokesman with the Beer Institute.

"We already meet or exceed the goals that the FDA would like us to see. So we see these regulatory procedures as completely unnecessary," Thorne told Fox News.

The FDA was flooded by comments from brewers, distillers and cow farmers when the proposed rule was announced.
Responding to the outcry, the FDA said in a statement it is now looking to revise the language for the rule this summer before issuing a final decision sometime next year.

"We are working to develop regulations that are responsive to the concerns expressed, practical for businesses, and that also help ensure that food for animals is safe and will not cause injury to animals or humans," the FDA said.


This represents a classic example of a sprawling federal bureaucracy looking to justify its existence by creating a make-work program, if you will, that accomplishes nothing but to the detriment of the dairy/cattle and brewing industries.


For you big government types, regulations are all fine and dandy when they don’t effect you. However, think of this completely unwarranted and unnecessary intrusion into a completely voluntary and mutually beneficial business arrangement the next time you are pedaling your fixie over to Toronado for a Pliny the Younger.

At a Rose Garden presser yesterday, here’s the winner of the Washington Post’s “Lie of the Year” do a victory lap in claiming that the administration met its goal of signing up 7 million “enrollees” for the federal healthcare law (aka "ObamaCare) by the March 31st deadline.


The administration that from October 1st right up until yesterday was purposely vague as to the number of “enrollees” suddenly got purposely specific on the day after the sign-up deadline. Weird. Forgive our cynicism but if the goal had been 8.5 million or 10.2 million, we know damn well what number they would’ve pulled out of their collective asses for yesterday’s presser.

And about this term “enrollee” – what specifically does it mean? Again, no specifics from the White House because the only figure that matters is the number of people that have paid their premiums… a figure which the White House has been conveniently unable to provide.


Despite the gloating and happy talk from the President, folk who have taken the time to crunch the numbers tell a different story. A survey of insurers and other industry players has shown that of those 7.1 million the administration is parading around, anywhere between 65-89% of them were previously insured. And the majority of those who previously had insurance signed up on the ObamaCare exchange because either their company dropped their coverage or their insurance plan was rendered illegal by ObamaCare.


After all this law has put us through for the last 4 years, in a nation of 350 million people, we are talking about insuring in the neighborhood of 2 million previously uninsured people with upwards of 45 million federal law-breakers still walking around out there scot-free. Heckuva job, guys.

“The debate is over…”

A curiously undemocratic thing for the leader of the Democratic Party to say. Something like that is reserved for a person who knows he cannot debate his side on its own merits because the facts on the ground don’t support it. Perhaps not coincidentally, it is also something said to us only by our parents while we were children, at least without getting heckled out of the room. And perhaps not coincidentally, that’s the same line used by the global warming book-cookers and decline-hiders.


We can only hope the President’s un-Presidential gloating doesn’t lead his fan boys and fan girls to engage in more “civility” and “tolerance” like the below: 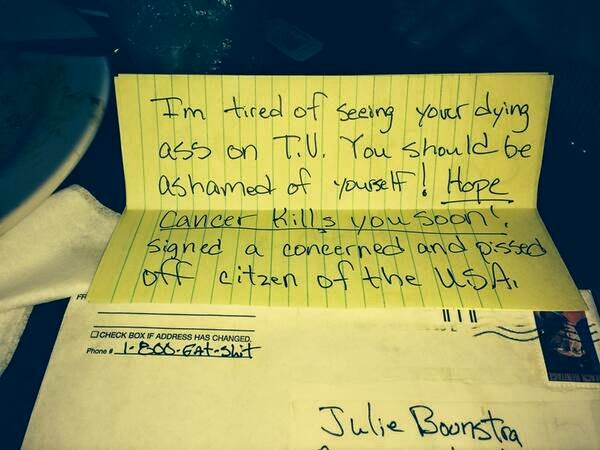 What were we saying again about not having the facts on one's side?

As it stands currently, we will continue our fight in debating our side and happily subverting this law in any peaceful, legal and civil way we can.