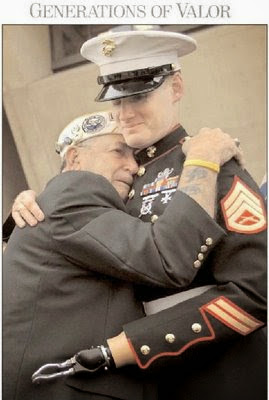 Over the weekend, Salon writer, DAVID MASCIOTRA, caused quite a bit of dust-up on social media with his own “salute to the troops” ahead of Veteran’s Day . Here is the headline, followed by the sub-headline and then followed by the first paragraph of the piece.

It's been 70 years since we fought a war about freedom. Forced troop worship and compulsory patriotism must end

Put a man in uniform, preferably a white man, give him a gun, and Americans will worship him. It is a particularly childish trait, of a childlike culture, that insists on anointing all active military members and police officers as “heroes.”

If you desire, you can read it in its entirety, here.


The first thing that jumped out at us was the use of “forced” and “compulsory”. His definition of the words would be at odds with ours or else he would be in some sort of legal trouble outside of being roundly criticized on the internet. But, we suppose, if you are going to pen this on the weekend prior to Veteran’s Day, you’d be well-served to go big on hyperbole. And what we’ve seen on T.V. this weekend, mostly at sporting events, was expressions of thankfulness and gratitude, not worship. But, again, if you are going to go there, go big.


So, let’s put semantics aside and dig right into this with a critique angle that originates from the American left, Saul Alinsky specifically, and which is rooted in using one’s own arguments against them. Are you familiar with the term “mansplaining”? Wiki has got it covered here, but in short it is: "a man condescendingly explain[ing] something to female listeners".


And more expansively, it is the phenomena of the explainer knowing less about the subject than the explainee. Narrowing it down again, we’ve seen the term used most consistently in the abortion argument where men have no right to an opinion on the matter since they are biologically incapable of having one. OK, then. So, what say you, Mr. Masciotra? Oh, wait. Who cares what this guy has to say? He is the ideological heir of those who spit on the G.I.s and Marines returning home from Vietnam. The man despises the military as an institution so WTF right does he have on even opining on the subject? By the logic of the left, his arguments are null and void from the start. See how that works?


But shutting down dissent is no fun, right? Especially when we can have more fun deconstructing his argument.


Maybe ol’ boy is pitching such a fit because he’s jealous. That’s right, jealous. Gallup has been tracking respect in/confidence in various American institutions for decades. Follow the link here and you’ll see the military has, over the years, been the most respected institution in America. And where would Masciotra’s profession(s) be? Newspapers, Television news, internet news, i.e., the mainstream media, are towards or right at the bottom of the heap.


Scroll down to the performances of the individual institutions over the years and you’ll see that the military’s numbers have remained steady where the public’s confidence in the media has eroded over time. So, perhaps having a 4th estate, the watchdog of democracy, that is so un-respected because the public lacks confidence they are doing their job is more deadening to real democracy than “worshipping” the troops.


The definition of “hero” is very much open to interpretation as it should be. One man’s hero may not be another’s and that’s fine. But here’s the thing Masciotra and his ilk don’t understand: Members of the most respected institution in the country will get the benefit of the doubt in this country’s cultural lexicon. And members of the least respected institutions in this country, the media hackeratti, of which he is a member, will not. Sorry, Dave, no one likes you.


Pre-historic societies passed along history and the pillars of that particular culture through story-telling and myth-making. Warriors were held up as models of physical bravery, courage and honor. There is a positive aspect to mythologizing the favorable aspects of society be they soldiers or not. Characters in our country’s past like, Paul Bunyan, Johnny Appleseed and John Henry have been mythologized and made figuratively larger-than-life in an effort to strengthen a shared American cultural experience and to perhaps serve as an anology to vastness of our country.


The vet = hero narrative is really no different. We’ve seen it a couple of times when we are out with my little brother and his family where he will “force” his 3 young children to approach members of the Huntington Beach Fire Department to express their gratitude and thanks for the work they do that if it hasn’t already, may certainly in the future, put their limb and life in harm’s way. My little brother is mythologizing (making his children look up to) the best aspects of our culture through these men: sacrifice, courage and bravery being among them.


And almost identically, the vet = hero narrative mythologizes and makes larger-than-life its subject because a huge swath of the country of which Masciotra finds foreign, still believe these traits to be important to our country.


Let’s leave with this: Guys: when you were growing up, what did you play? “Army” or “crap-weasel columnist at a lefty rag”? Ladies: “Into whose arms do you wish to fall? A fireman’s (mustachio and all), or David Masciotra?

* Pearl Harbor survivor Houston James of Dallas, Texas embraces Marine Staff Sgt. Mark Graunke Jr. during a Veterans Day commemoration in Dallas. Graunke lost a hand, a leg and and eye when he was injured by a bomb in Iraq.

A special Veterans’ Day shoutout to my two older brothers who also happen to be two of my favorite Cold War warriors who served with distinction and honor in this country’s nuclear sub fleet and the U.S. Army’s vaunted 82nd Airborne Division, respectively.