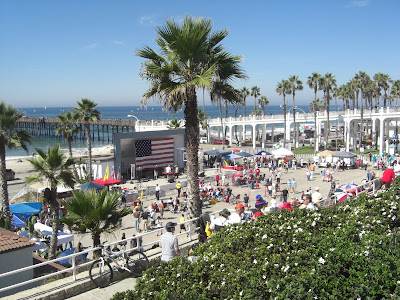 (please scroll down to bottom for videos of Jamiel Shaw Sr. and Leslie Eastman)


The following are pictures and some commentary from the tea party rally up in Oceanside yesterday. A healthy crowd was on hand considering the beautiful do-anything-except-go-to-a-rally weather and the fact that the Chargers we're on the telly. 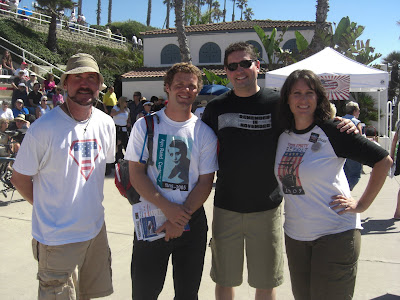 Some of the SLOBs (San Diego Local Order of Bloggers) of whom we would like to welcome a new member, Shane Atwell, whose blog can be found here. Welcome aboard, Shane, whether you like it or not. 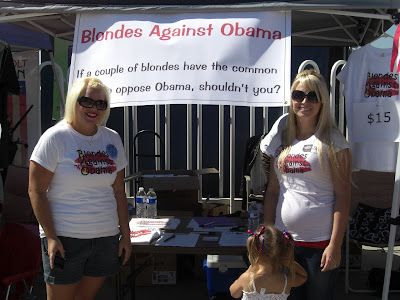 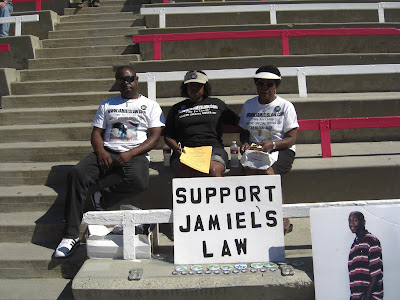 Jamiel Shaw Jr.'s family. Back in '08, Jamiel was gunned down in Los Angeles in cold blood by an illegal immigrant who had just been released from jail mere days before. Jamiel's family is working on getting a law passed that would end L.A.'s de facto sanctuary city status. Jamiel's father spoke, however, we missed it as we were running lawn signs back to our truck. Fellow SLOB, W.C. Varones, captured his moving speech on video and will be posting it later. We will post it here when we have the opportunity.

The link to the website statusing the progress of Jamiel's Law that we have been carrying for two years in the right hand margin under, "Fighting the Good Fight" has been disabled. We will try to restore it so we can stay abreast of this very important initiative. 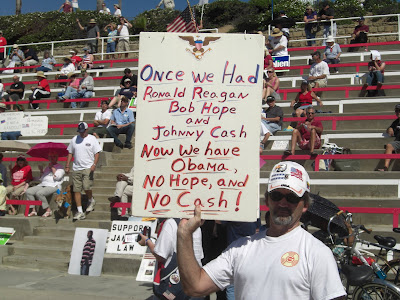 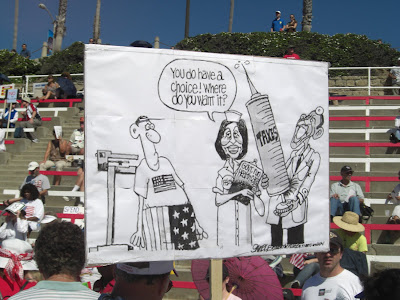 A couple of very peaceful, non-flame throwing counter protesters were milling about the floor of the amphitheater and were asked to leave by private security. This bothered us greatly. We understand there have been security concerns with respect to the safety of some of the tea party activists but this action seemed rather heavy-handed and not in keeping with the spirit of the 1st amendment and every one's right to peaceably assemble.


So captivated were we by Temple of Mut's Leslie's speech that we did not get any pictures of her up on stage. B-Daddy of The Liberator Today, who's thoughts on the rally can be found here, may be posting Leslie's speech and when it is available we will re-post or link to it.

Speaking of Leslie, we've got to get something off of our chest: She was treated rudely and in a completely unprofessional manner as two people were very visibly trying to rush her off the stage towards the end of her speech on her recent experiences with the Italian tea party movement. We won't mention who these two people were because everyone there at the rally could see it.

Every damn speaker prior to Leslie flapped their gums to their heart's content without getting the bum's rush but suddenly time became an issue when she got up to speak? You had one guy at the opening of the rally ramble on for 15 minutes about the history of the original colonial tea party in what should have taken 5 minutes and J.D. Hayworth, god bless him, simply would not shut the hell up.

For someone who has worked tirelessly and passionately for the tea party movement both here and abroad, the treatment of Leslie was shameful and lacked any class and decency. Shame on you two - you know who you are.

There, that felt a lot better. All in all, we think everybody had a great time and it was a wonderful way to spend a beautiful Sunday afternoon.

(UPDATE #1): Via and with many thanks to W.C. Varones, here is the heart-breaking story of Jamiel Shaw Jr. as told by his Dad.

Jamiel Sr. is not afraid to say the entire city and region of Los Angeles is held hostage by the latino vote.

And here is Leslie's speech.

Thanks for the shout-out Dean, it is much appreciated. I am looking forward to celebrating with the SLOBs at some sort of Nov, 2nd event! :)

Thank you for the great wrap-up!