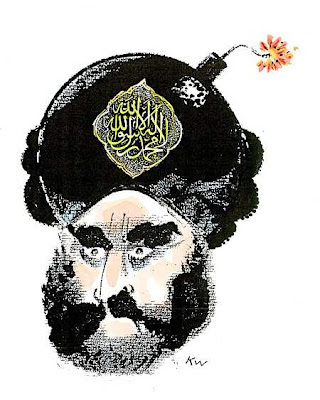 In light of recent events that have occurred both in the Middle East and here on our very shores, we have decided to start a Free Speech Saturday series where we devote a post each Saturday to the 1st amendment and the protections to what we can shout from our rooftops that amendment affords us.

And, yes, we realize it’s Sunday… Events beyond our control prohibited us from getting this up and out before this morning.


On Friday, the filmmaker who is alleged to be responsible for the rioting and killing over in the Middle East was brought in for “voluntary questioning” by the L.A. Sheriffs Department.


Just after midnight Saturday morning, authorities descended on the Cerritos home of the man believed to be the filmmaker behind the anti-Muslim movie that has sparked protests and rioting in the Muslim world.

Los Angeles County sheriff's deputies escorted a man believed to be Nakoula Basseley Nakoula to an awaiting car. The man declined to answer questions on his way out and wore a hat and a scarf over his face. He kept his hands in the pockets of a winter coat.

Sheriff's officials could not be reached by The Times, but department spokesman Steve Whitmore told KNBC News that deputies assisting the federal probation department took Nakoula to the sheriff's substation in Cerritos for interviewing. 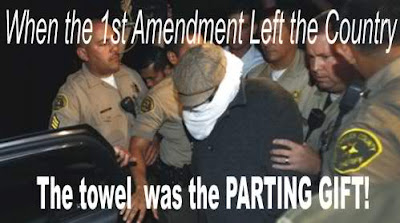 (image courtesy Leslie at Temple of Mut whose views on the matter can be found here).

Because nothing says “police state” like “Just after midnight Saturday morning, authorities descended on the Cerritos home…”.

And we care not a lick that Nakoula was released without being further detained or arrested. We care not a lick that he is a previously convicted felon and that the Sheriffs were just doing some potential parole violation follow-up. It doesn’t matter anymore. The man has been outed by his own government, aided and abetted by a media who has done more leg work in getting into this man’s background than they did in vetting a certain presidential candidate back in 2008.

In the aftermath of 9-11 we came to the quick realization that the jihadists would prevail not by felling our buildings nor by killing our people but by making us question that which we formerly valued. When authorities are swooping in on you in the dead of night for some “voluntary questioning” because of a crappy Youtube video you made, the 1st amendment is in the “formerly” cross-hairs. Congrats, jihadists, you've got first and goal at the one.

People who should absolutely know better like a religious studies associate professor from Penn, Anthea Butler, are penning articles titled:

Our favorite line from the horrible article:

If there is anyone who values free speech, it is a tenured professor!

Anthea, the exclamation point won't detract from the deplorable state of higher education in this country demonstrated by your excrable article.

Her logic that the crappy Youtube video provoked a violent response from believers in Islam sent us scrambling for our own copy of the Constitution to see if there was some sort of "incitement exemption" in the 1st amendment. She definitely has a different version than we for there are no such qualifiers in our copy.


With Nikoula’s release, it reminded us of a quote from Canadian journalist/publisher, Ezra Levant who was eventually acquitted of any wrongdoing by the Alberta Human Rights Commission after a 900 day investigation for his role in reproducing the Mohammed-as-terrorist Danish cartoons.


Pardeep Gundara – a second-rate bureaucrat, a nobody – had to give me his approval for me to be allowed to go back to my business. For 900 days I was in the dock, waiting for this literary giant to pronounce his judgment on me. And I found favour in his eyes – but barely.

Sorry. I don’t give a damn what Gundara or the HRC says. Getting his approval is not a success. I won't legitimize his arrogant "authority" by saying "thank you, master". I'll say: "who the hell are you? Besides a busy-body bureaucrat?"

Look at his rationale for acquitting me: because the Western Standard met Gundara’s home-made tests of reasonableness. We published the cartoons in “context”; we published letters that “criticized” them; and my favourite, the cartoons weren’t “simply stuck in the middle” of the magazine. Gundara must have thought for ten whole minutes to come up with that list of journalistic do’s and don’t’s. And – phew! – he likes me. He really likes me!

Sorry again, I don’t give a damn if he likes me. In fact, it rather creeps me out that a whole squad of teat-sucking bureaucrats spent 900 days inspecting me and the Western Standard. I positively want to offend them. In fact, that’s pretty much the only test of my freedom: can I do exactly what Gundara says I shouldn’t? I’m not interested in publishing recipes or sports scores. I’m interested in bothering the hell out of government.


A man to be admired, this Ezra Levant - we could not have said it better ourselves.


We hope you enjoyed this initial installment of Free Speech Saturdays of which we hope our resolve and this country's respect for the most fundamental right continues to make happen.

Great piece. Some of our opponents say Nakoula deserved to be arrested, because he was violating parole because he couldn't use the Internet under the terms. They insist that because the video is still up, it's not a First Amendment issue.

thank you for saying it so damn well!!!