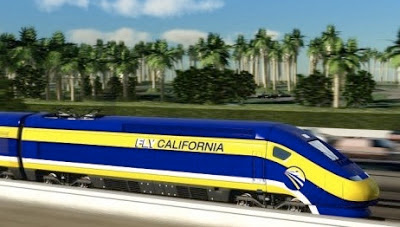 
We held off on running with the following regarding the state of California’s insistence that it did not need federal funding for its high speed rail project just yet. Obviously, having secured roughly just $2-1/2 billion via publicly-approved state bond sales of the $68 billion needed overall (which will certainly be much, much more as that total doesn’t include the cost of the actual trains or for actually electrifying the project), California is, no doubt, going to come hat in hand to DC at some point to get funding to get this Brown-doggle completed.

California’s landmark high-speed rail line won’t require cash from Congress for at least two years. But at some point, it will.

That’s the message the California High-Speed Rail Authority’s leadership team is sending to Washington about the massive $68 billion project set to break ground this year.

The planned statewide system is short about $60 billion, some of which will undoubtedly need to come from Congress. But CEO Jeff Morales and Chairman Dan Richard — in Washington last week for meetings during the U.S. Conference of Mayors — told POLITICO they didn’t come to the capital with hat in hand.

“We don’t need new federal money for about two more years,” Morales said during an interview at the Capital Hilton. “We’re not here asking for a new round of funding right now. Having said that, we do need — over the long run — some form of ongoing stable federal support.”

With Republicans in control of the House, there is scant hope of getting any federal scratch until, at least, January of 2015 at the earliest.

But there is something else going on here, something much more pedestrian than the political make-up of the legislative body in charge of this nation’s finances as a reason to not seek federal funding.


Cue the other shoe: they don’t yet own a single parcel of land on which to build.


Construction of California's high-speed rail network is supposed to start in just six months, but the state hasn't acquired a single acre along the route and faces what officials are calling a challenging schedule to assemble hundreds of parcels needed in the Central Valley.

The complexity of getting federal, state and local regulatory approvals for the massive $68-billion project has already pushed back the start of construction to July from late last year. Even with that additional time, however, the state is facing a risk of not having the property to start major construction work near Fresno as now planned.

It hopes to begin making purchase offers for land in the next several weeks. But that's only the first step in a convoluted legal process that will give farmers, businesses and homeowners leverage to delay the project by weeks, if not months, and drive up sales prices, legal experts say.

One major stumbling block could be valuing agricultural land in a region where prices have been soaring, raising property owners' expectations far above what the state expects to pay.

"The reality is that they are not going to start in July," said Anthony Leones, a Bay Area attorney who has represented government agencies as well as property owners in eminent domain cases.

State high-speed rail officials say it won't be easy, but they can acquire needed property and begin the project on time.

"It is a challenge," said Jeff Morales, the rail agency's chief executive. "It is not unlike virtually any project. The difference is the scale of it."

Under a deal worked out with the Obama administration, federal funding is contingent upon completing the first 130 miles of the project in the Central Valley by 2018, a schedule which would require burning through $3.6 million of the projected budget every day.

What the project now faces is an array of legal, bureaucratic, engineering, logistical and eminent domain challenges that makes the sunny face put on the project by Governor Brown and project officials appear farcical.

Indeed, the rail authority's formal right-of-way plan indicates it does not expect to acquire the first properties until Sept. 15, despite other documents that indicate construction would start in July. Rail officials said they padded the schedule to avoid claims for additional payments by construction contractors should land not be available by July.

This is also known as lying.

The General Accounting Office (GAO) has estimated that of the 400 parcels of land in way of the initial stages of construction of the project, about 100 of them were at risk of not being available at the time of construction. A gut feel tells us that is a conservative estimate.

And where market values price Central Valley acreage at $28,000, the high-speed choo-choo honchos have only budgeted values at $8,000/acre.

In summary, the mess that is California’s high speed rail project keeps getting hotter and hotter.

KT Cat .........know you are joking, but seriously, this is a horrible situation

KT, what do you mean? They will seize the land, its not a matter of if, but when.

$8000 per acre is an average. That works out to $5 million/acre for politically connected landowners, $500 per acre for regular folks, and $10 per acre for anyone registered to vote as a Republican.

On the plus side, the state will save money by not bothering with title searches.

I was curious if you ever thought of changing the layout of your website?
Its very well written; I love what youve got to say. But maybe you
could a little more in the way of content so people could connect with it better.
Youve got an awful lot of text for only having one or 2 images.
Maybe you could space it out better?

Here is my web-site ... healthy diet plans for women