A bake sale would appear to be so much more dignified. 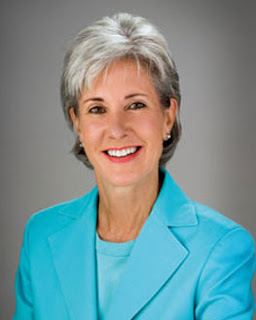 ... if not more ethical and/or legal.

It's been well-documented in these pages just how poorly the Affordable Healthcare Act (aka ObamaCare) roll-out is coming along as the ranks of those who wrote and/or voted for the law have been playing CYA of late with respect to, in their words, the coming "trainwreck".


Now, count the Secretary of Health and Human Services Secretary, Kathleen Sebelius (pictured), as one of those going into panic mode because she feels a hugely controversial and high-profile piece of legislation that became the law of the land over 3 years ago is not being properly educated to the public. In fact, things are so bad that she is being reduced to going hat in hand to solicit donations from not only tax-preparers but the health insurance lobby itself in order to jump start a broader public awareness campaign for Obamacare.

From the New York Times:


WASHINGTON — Kathleen Sebelius, the secretary of health and human services, has solicited sizable donations from the Robert Wood Johnson Foundation and H&R Block, the tax preparation service, as part of a multimillion-dollar campaign to ensure the success of President Obama’s health care law, administration officials said Sunday, even as a leading Senate Republican raised questions about the legality of her efforts.

The foundation is expected to contribute as much as $10 million, while H&R Block is expected to make a smaller donation of about $500,000, the officials said.

The senior Republican on the Senate health committee, Senator Lamar Alexander of Tennessee, said the fund-raising “may be illegal.” He likened it to efforts by the Reagan administration to raise money for rebels fighting the leftist government of Nicaragua in the 1980s, after Congress had restricted the use of federal money. Aides to Mr. Alexander said Sunday that he would ask the Government Accountability Office, an investigative arm of Congress, to examine the propriety of the Obama administration’s fund-raising efforts.


Repeat the following slowly: Funds are being "solicited" from tax preparer services for a law that will be enforced by the federal tax agency, the IRS. For those of you in Placentia, California, that would spell "conflict of interest".

And that's a nice touch by the Senator from Tennessee: always invoke a scandal from the other side's bête noir for a proper display of bipartisan skepticism.


The Department of Health and Human Services said that Ms. Sebelius’s actions to supplement money appropriated by Congress were proper and would continue, despite criticism from Republicans. After first denying that administration officials had engaged in fund-raising, the department confirmed Friday that Ms. Sebelius had made calls soliciting support from the health care industry, including insurance and pharmaceutical executives.

Jason Young, a spokesman for Ms. Sebelius, said she had suggested that health care executives and others support the work of Enroll America, a private nonprofit group that shares the president’s goal of securing coverage for people without insurance. Several people who received solicitations said that current and former administration officials had suggested seven-figure donations.


Again, let's ease ourselves into the way back machine and touch on the relationship enjoyed between Sebelius and the health insurance industry. As soon as the ink was dry from the President's signature, health insurance companies faced with covering more people and more people with more mandated coverage provisions, warned that insurance premiums would necessarily rise significantly because of this. This did not set well with Sebelius as she engaged in some not-so-subtle bullying of her own.

"There will be zero tolerance for this type of misinformation and unjustified rate increases," Health and Human Services Secretary Kathleen Sebelius said in a letter to the insurance lobby.

"Simply stated, we will not stand idly by as insurers blame their premium hikes and increased profits on the requirement that they provide consumers with basic protections," Sebelius said. She warned that bad actors may be excluded from new health insurance markets that will open in 2014 under the law. They'd lose out on a big pool of customers, as many as 30 million people nationwide.


We suppose we can't blame her for being mildly chapped as the Health lobby itself was also in those backrooms writing up the legislation. Imagine the sense of betrayal amidst the cozy corporatist arrangement enjoyed by Big Health and the federal government.


She later backed off that threat but the damage had been done as the message was made entirely clear: Mighty fine health insurance company you got there. It'd be a shame...


So, considering this highly, err... passive-aggressive relationship between the two entities since the passage of ObamaCare we now have this:


While Ms. Sebelius asked for support from health care executives, she did not make “a direct fund-raising appeal” to entities regulated by the government, Mr. Young said. In any event, he said, under a decades-old federal law, the secretary can encourage support for private nonprofit entities promoting public health.


Terrific: on one hand we have a high-ranking administration official threatening the livelihood of private businesses for speaking frankly and on the other we have that same person looking for financial support from said private businesses. We'd be impolite to call this a shakedown but does this administration have any idea how horrible the optics on this look? Any idea whatsoever? We'd also call this relationship adversarial but since they're in bed together, can we just call it a bad marriage? A bad marriage made permanent by a horrible law?


If those folks who claim they live in the reality-based community want the rest of us to put our tin foil hats away, they're going to have to do a better job than this. Within the same calendar week that the IRS has admitted to bureaucratic harassing of conservative groups, we have the federal government soliciting donations from tax-prep agencies and private entities to help fund a public-awareness campaign for their miserable law.


For those of you who question the inherent dangers of a corporatist style of governance favored by this administration, here it is writ large and with feeling.

Quality content is the secret to be a focus for
the visitors to pay a quick visit the web page, that's what this web page is providing.

Hi there, You've done a fantastic job. I will certainly digg it and personally recommend to my friends. I'm confident they'll be benefited from this website.

I am sure this piece of writing has touched all the internet
users, its really really fastidious post on building up new blog.


Take a look at my blog: asbestos Attorney nashville

Your content has most loquacious qualities! I am pleased that I found this and have invited the authorities from my prefecture to gander-take at it! Visit my weblog: http://ktcatspost.blogspot.com/

Hi there, I check your new stuff on a regular basis. Your humoristic style is witty, keep doing what you're doing!

This is very attention-grabbing, You are an overly professional blogger.
I've joined your feed and stay up for in the hunt for extra of your magnificent post. Also, I have shared your web site in my social networks

Check out my weblog basic cooking

My family always say that I am killing my time here at net, but I know I am getting know-how
every day by reading such nice articles.

I find that violin playings pick up with the girls. They like it when we fiddle around.

This wonderific blog was recommended to myself by small cat of regal bearing. For more information you can see my impossible blog about the makings of violin strings. Why Cat is running away now?

Expense text and on the internet translators are good
for getting the complete idea of unknown text.

Hello Friend!
Do you consider yourself a "friend of the constitution"? A "patriot"?

You'll want to have several cooking pans or ovenware accessories on hand to use. Then you would't need
to check your options for rust.

This blog is hot tomatoes & if it were a garden, I would plant a garden gnome to freshen the flowers from www.theslobs.org

Train wrecks are fascinating to me and should provide much quality health care. Cats not so much but provide good internets.

Guys are killing me.