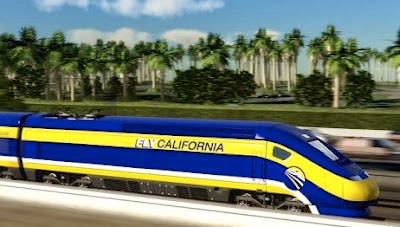 
Amid mounting legal problems thrown down by California Superior Court Judge Michael Kinney regarding the financing of the high-speed choo-choos, the project is now facing internal fire from their own peer review board over the travel time between San Francisco and Los Angeles.


From the L.A. Times and their high-speed rail beat writer Ralph Vartabedian:

Regularly scheduled service on California's bullet train system will not meet anticipated trip times of two hours and 40 minutes between Los Angeles and San Francisco, and are likely to take nearly a half-hour longer, a state Senate committee was told Thursday.

The faster trips were held out to voters in 2008 when they approved $9 billion in borrowing to help pay for the project. Since then, a series of political compromises and planning changes designed to keep the $68-billion line moving ahead have created slower track zones in urban areas.

But Louis Thompson, chairman of the High-Speed Rail Peer Review Group, a state-sanctioned panel of outside experts, testified that "real world engineering issues" will cause schedules for regular service to exceed the target of two hours and 40 minutes. The state might be able to demonstrate a train that could make the trip that fast, but not on scheduled service, he told lawmakers. If public demand for the service supports additional investments, travel times could be improved after the currently planned system is built, he said.


The article does not expand on to what specific “real world engineering issues” Thompson is referring but let’s just assume he’s talking about “stops”, as in “stops” to let fare-paying business embark and disembark the choo-choos.


This thing has become so politicized and such an albatross, we can imagine every blessed cow town out there in the Central Valley is demanding that if the choo-choos are going to be rolling through their jurisdiction, then by damned, they are going to be making a stop there.


And with every stop there is the inherent logistical inertia with respect to safely loading and unloading passengers that will have to be factored into that 2 hrs. and 40 minutes claim.


But 2 hrs. and 40 minutes? $68 billion (real world estimates put this project at nearly twice that, by the way, due to budgetary sorcery wrought by Brown’s cook crooks) to achieve a feat that can be accomplished in 50 minutes via aircraft out of Burbank to San Jose? And now the experts say it's going to take 30 minutes longer than that?


Rail authority officials said after the hearing, held by the Senate Transportation and Housing Committee, that they would meet the requirements of state law, but did not specifically say that trains would operate at the faster travel times. State law requirements may be open to legal interpretation. Language approved by voters says the system must be "designed to achieve" trip times of 2 hours and 40 minutes.

Did you see what just happened there? The original voted-upon 2 hrs. and 40 minutes is now the faster time. Peachy.

The article ends by talking about Brown raiding the carbon emissions cap and trade fund to help finance the project, a mere pittance up against the $68-120 billion tab (in the 6 years since voters approved the project, they have yet to name one private source of funding which will be required to finance this boondoggle).


The largest public works project in the history of this country, which will of course, be powered by very conventional fossil fuels is receiving cap and trade dollars; an irony which we are sure is not lost on you.


As it stands, dear readers, yet another nail in the considerably-sized coffin of California’s high-speed choo-choos. We cheer on its staggering, stumble-drunk demise.