Cleaning out the InBox 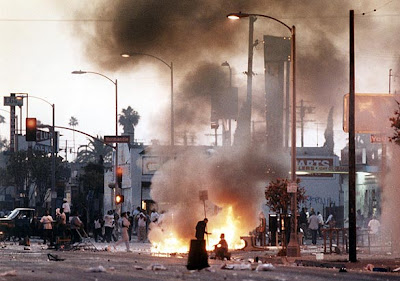 Didn’t get around to it as we were captivated by the sports weekend and the House’s rutting and thrashing about with respect to thought crime legislation but, if you’re anything like us, the 17th anniversary of the Rodney King verdict/L.A. riots blew right on by without being properly recognized. The L.A. Times has a nice photo essay, here. We have another anniversary we'll be covering later, as well.

Still remember being home sick in bed with mono for six weeks, and watching the verdict come down, phoning my girlfriend in West L.A. to tell her to be careful that night -- there would be some angry folks, and then watching the first helicopter shots of smoke billowing up.

90 minutes later, the prevailing winds had carried the ash from the now hundreds of fires 30 miles to my parents' swimming pool.

- Mongo Just Thinking Last Night What Circumstances Will Bring On the Next One, and When