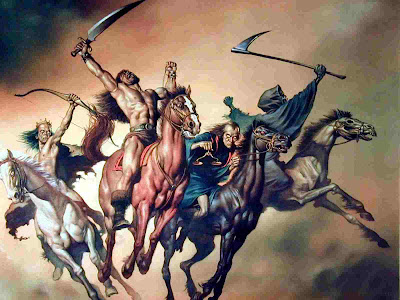 And the fear-mongering continues...

California could run out of money as soon as July, the Legislature's chief budget analyst warned Thursday, as a new poll showed voters poised to reject five budget-related measures on the May 19 ballot.

If the propositions do not pass, the state could find itself as much as $23 billion short of the money it needs to pay its bills over the next year, according to a new forecast by Legislative Analyst Mac Taylor. The poll, from the Public Policy Institute of California, found that even as voter interest in the ballot measures rises, all are trailing except the sixth one -- Proposition 1F, which would bar pay hikes for lawmakers in deficit years.

So, after threatening to hack firefighters, what was another one of the Governor’s big ideas to close the budget gap: Prisoners running loose in the streets. For reals.

On Thursday, the administration advised law enforcement officials that it was preparing plans to commute the sentences of 38,000 state prison inmates, including all illegal immigrants. It also is considering closing some prisons and sending inmates to county jails, according to a copy of the proposal obtained by The Times.

It's always, repeat, always these apocalypto-type scenarios that are conjured-up when talking about Sacramento budgets and never trimming any fat. As Capt. Ed suggests, how about knee-capping some non-essential spending like stem cell research the state is helping fund. We had completely forgot about that one. That's a $6 billion dollar hit, right there.

But it'll never happen. Scaring the townies with Wes Craven-like campfire stories is so much more fun and easy than taking a wood axe to non-essential elements of the budget.

* Not saying it would be any better but it sure as hell wouldn't be any worse. A whole lot of churn for nothing, it looks to be.

- Mongo Asks: Can we now have the last president resign retroactively for his NOLA flyover request, now that a precedent has been set in a Back To The Future kinda way??