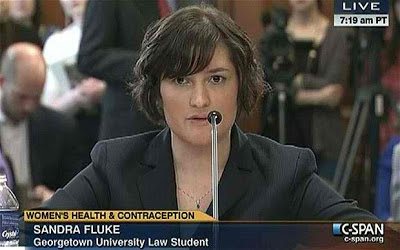 You just can't make this sort of stuff up but apparently, Sandra Fluke, the middle-aged Georgetown Law School student whose call for everyone but herself to pay for her contraceptive devices and which became a central plank in the Obama re-election platform is on the short list for TIME Magazine's Person of the Year.

Actually, since this election was a referendum on the entitlement class, it makes perfect sense.


Can you think of anyone who better represents the America of 2012 than Ms. Fluke? I can’t.

She’s got it all: The “Generation Cupcake” inadequacy (“So what if she didn’t earn the award — give it to her, anyway!); the “Occupod” sense of entitlement (“Somebody should be buying my condoms, and it ain’t gonna be me!”); and, of course, the liberal detachment from reality (“There’s a war on women! We’re being oppressed! Just ask Hillary Clinton, Condi Rice and Oprah!”).

Then there’s the economic angle. One could argue that the icon of the failing Obama economy is the college grad with a worthless degree under his arm and a bed in his mom’s basement.

Time magazine gives us Sandra Fluke, with a bachelor’s degree in (no joke) Feminist, Gender, & Sexuality Studies, no marketable skills, and still on the academic track, living on the largess of others.

I’m not trying to be mean to Sandra Fluke. Unlike Rush Limbaugh I make no comment on her personal life or sexual proclivities.

But I also didn’t — and would never — put this unaccomplished 30-something on the “Person of the Year” list for publicly whining about paying her own bills.

And if I were Ms. Fluke, I’d be embarrassed by Time’s selection. I’d be pointing out the people who’ve actually made some impact— maybe Fidelity’s Abigail Johnson, or Malala Yousufzai, the 14-year-old girl shot by the Taliban for insisting on attending school.

Ah, but I’m not Sandra Fluke, who used her “Person of the Year” moment to complain, in a tweet, about the “few women” nominated.


Yeah. In a day in time when our entitlement programs are threatening to swallow-up our economy and the fiscal cliff debate is centered around class warfare, a woman whining that you should pay for her rubbers and birth control pills is indeed the perfect candidate for TIME's award.


it is deemed an incredible, stunning, simple and easy genuine video clip of an great idea. I am a real fan of one's perform! I'd personally please take a bite involving sweet away a sapling everyday. Diablo III items

One player on the European clothing Blizzard Forum released a named Diablo repair list posts (friends who are interested can take a look at the blue paste the address of the original post). Post, he lists out many of the other players repeatedly mentioned items and PvP content, but also many new points. This post has been community
rare pets Vaneras praise, he again stressed that Blizzard did not think Diablo 3 has been perfect, but also that the quality should be able to better. Some very interesting details, some suggestions and ideas need to wait for information on the film to achieve, and which ideas and suggestions? Thanks for your Diablo fix a list of very good posts, I can see that there are a lot of ideas in the posts, and I think there is a need to carefully understand. :-)