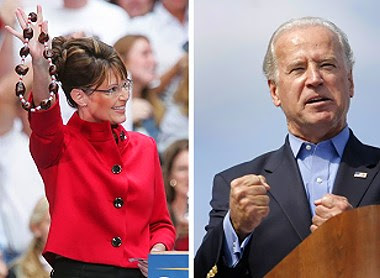 We caught most of the debate on the replay last night (Oregon St.’s “prevent (winning)” defense had the inevitableness of a guillotine execution and we simply could not avert our eyes).

Outside of breaking things down point by point our overall impressions are this: Despite sticking to talking points a tad too much and considering this was her first big test on the national stage, we thought Sarah Palin did very well. A little too heavy on the "folksy" but on the whole, a very solid showing. Her fresh delivery was in stark contrast to Biden’s well-tread Belway pitch. And Biden? Well, we thought Biden sounded commanding, authoritative, very senatorial and…. we had absolutely no clue what the guy was saying half the time.

For reals? This was the guy that’s supposed to be a great debater, a regular trick at the give and take and a guy whose 63 years in the Senate give him the polish to wipe the floor with Palin? Good god. Never in our life have we seen a guy more in love with the sound of his own voice. And maybe Biden came across like that because he had no idea, himself, of what he was talking about.

Here’s the U-T with their usual astute analysis:"If Palin was more likable, however, Biden's command of the issues was simply of a higher order. Palin didn't have a single moment as impressive as Biden's short discourse on the vagaries of recent U.S. policies regarding Israel, Hamas and Hezbollah. It was remindful of how McCain displayed his mastery of U.S. policies toward Russia during his debate last week with Obama".

"Command", huh? Obviously, then, they must’ve been referring to Biden saying, “When we kicked — along with France, we kicked Hezbollah out of Lebanon, I said and Barack said, “Move NATO forces in there. Fill the vacuum, because if you don’t know — if you don’t, Hezbollah will control it.” Now what’s happened? Hezbollah is a legitimate part of the government in the country immediately to the north of Israel.”

Of course, nothing of the sort ever happened…. Nothing even remotely close or resembling that statement from the so-called foreign policy expert ever happened, yet that is the section of the debate upon which Big Media heaps its praise and where it claims Biden set himself apart from Palin. If by “set apart” one means “completely making stuff up” then Big Media is spot-on.

This sums up perfectly an entire industry that doesn’t even bother to put-up the façade of an honest effort.

"Biden's command of the issues was simply of a higher order"

What's wrong with being folksy? :)

Biden said something about 3weeks in Iraq was equal to all of Afganistan. Total untruth, by 20 times the amount. Even if it were twice the amount, a total lie.

Palin did well to say it aint so, Joe, we'll leave it to the fact checkers.

The command and confidence, especially after being parodied, edited and gotcha'd was tremendous. Biden has decades, Palin had weeks.

For a second time, she has provided an opportunity for McCain resurgence

John commented on the radio today, his bar had just been set a lot higher

The Celebrate Mediocrity & Ignorance Tour lives to see another day for the GOP.

- Shank Piston Palin wonderin' when Miss Teen S.C. will teasingly break out a "Maverick, you big stud, take me to bed or lose me forever" just to make her many male GOP admirers blow their minds...

Mr. Lloyd, you're back, she's waiting to use the "big stud" line until she meets the 'Dawg

Could you imagine the fun you would have for four years with a hot first lady and vice president?

You could make sexist comments for a whole term