Then again, what would one expect from the curator of the “man-made disaster” paradigm? 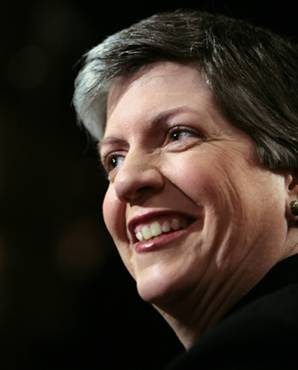 Homeland Security Secretary, Janet Napolitano, is taking quite a bit of grief for a quote she made regarding the Christmas bomber, that being “the system worked”. She later walked that back saying she was being taken out of context and that indeed the system did not work.

But here’s what she said that really puzzled us.

Homeland Security Secretary Janet Napolitano says there is no indication that the man who attempted to destroy an airliner in Detroit on Christmas Day is part of a larger terrorist plot.

Every single jihadist on the face of this planet be they trained and funded by or affiliated with Hamas, AQ, Hezbollah, the Taliban… even if they are “lone wolves”… whoever, is part of “a larger terrorist plot.”

That larger terrorist plot is called Islamic extremism and every single one of its minions is unified in its hatred for the West and its institutions and belief systems and are fatally committed to its destruction including all who live within it who are not found to be in sufficient compliance to Sharia law.

That Napolitano apparently fails to grasp this concept is, unfortunately, not shocking nor shocking enough combined with the frightening ease by which Abdulmutallab boarded the plane does not give us the warm fuzzies regarding our commitment to stopping airborne terror plots.

If she is like this, and is the spokesperson for Obama, imagine where he's coming from. Yemen is going to be the next big thing as far as terrorists. Bill Clinton ignored Sudan, will Obama ignore Yemen?

That it might not be part of a larger plot somehow makes it better? What an idiot, if some lone jerk-off can make a mockery of airline security, what's going to happen when they get organized? The AG may want to re-think her position.

She's forced into circumlocution by her principles of multiculturalism. She can't bring herself to say that Islamofascism even exists, much less that it's a danger. Hence, all this wacky blather.

Although we know what the MSM would say if it were Bush, (how cliche)airline terrorism on Christmas is too hard to ignore. Napolitano's remarks and Big O's golf game did not go unreported although it seemed like a slap on the wrist after the previous 8 years for something so egregious.

I love Dick Chaney popping up now and then speaking plainly and generally being a thorn in Team Obama's butt.

I wonder if he even considered the cost of a botched attempt.