Yet another high-speed choo-choo update 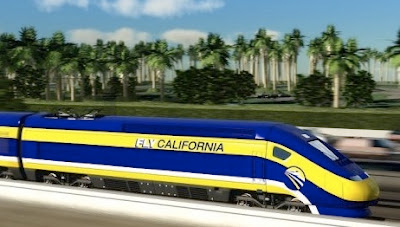 Bush-appointed Transportation Secretary Ray LaHood was up on the Hill yesterday, shilling for yet another administration boondoggle in high-speed choo-choos. Let's have a listen:

Transportation Secretary Ray LaHood confronted congressional Republicans for their objections to President Obama's high-speed rail initiatives Tuesday, telling them they should get on board with the president's rail push because their criticisms have been misguided.

“We are right at the point where we were when they started the interstate system,” an animated LaHood told lawmakers, drawing a parallel to the development of the federal highway system. “We are not going to be dissuaded by critics."

Or by the fact that we're the brokest nation on the planet for that matter.


Skepticism was evident in the title of Tuesday’s hearing by a subcommittee of the House Transportation and Infrastructure Committee, which was to examine “mistakes and lessons learned” from Obama’s rail efforts.

But LaHood, a former Republican member of Congress plucked from retirement by Obama, conceded no mistakes in his testimony.

He obviously has not heard of "California".

We should pause temporarily to state we are not opposed to high-speed rail in absolute terms rather opposed to high-speed rail where it doesn't make a whole lot of sense as in areas of this country where the population centers are more spread out like here on the West Coast. Where might high-speed rail make a lot more sense? How about the Northeast Boston-NYC-DC corridor. Maybe we should start there, see how things go and apply lessons-learned to other portions of the country to build this system when we have the money.


Shuster and other Republican House members have suggested that Obama erred by not focusing his high-speed rail effort on the populous Northeast region of the country, where rail is most popular.

But LaHood refused to agree that high-speed rail could only be successful there.

Fair. That's an interesting concept to employ when talking about the sensible expenditure of tax-payer dollars.

Republicans have criticized a high-speed rail proposal in California, which has received more money from the Obama administration than any other project,  for everything from its cost to the planned route of the railway.

LaHood pushed back at those arguments on Tuesday.

“If you don't like the places a high-speed rail is proposed to go in California, you need to talk to the people in California who've been working on high-speed rail for 15 years," he said. “This is not a result of President Obama or Secretary LaHood drawing [routes] on a map.”

Yeah, why are they blaming LaHood? Similar to Steven Chu, the Energy Department Secretary who is in charge of that department's green energy loan program, LaHood is simply in charge of throwing money around and shouldn't be held accountable for displaying a bit of intellectual curiosity before sinking billions of dollars into doomed-to-failure projects.

Democrats on the panel Tuesday backed LaHood, arguing that it did not make sense to concentrate high-speed rail in the Northeast.

“I'm not interested in throwing money away," Rep. Peter DeFazio (D-Ore.) said, but he added quickly that he did not want to focus only on the Northeast, "where, last time I checked, populations were declining compared to the West,” he said.

“We spent 70 years ignoring and destroying the rail system in the U.S.,” DeFazio said. “We're only in the second year of trying to rebuild it.”

LaHood agreed, saying he asked to speak to the panel Tuesday “because high-speed rail is a signature initiative of this administration.”

“You may not believe it, but the people want this,” he told the committee.


There is a scene in the movie Color of Money where Fast Eddie walks into a dingy pool hall (is there any other kind?) with his young protege' (Tom Cruise) and his girlfriend. Eddie (played expertly by Paul Newman) pauses, looks around and asks somewhat rhetorically, "Do you smell that?" Cruise's character, Vinny, replys, "Smell what?" Vinny's girlfriend responds dismissively, "Money".

Well, we know what we smell and it smells like pork.


The President doesn't want to allow a pipeline to be built that would create jobs plus provide an increasing degree of energy independence from friendly oil in Canada and he sics his NLRB on Boeing for having the temerity to desire to open a plant in right-to-work South Carolina but he is perfectly willing to spend money we don't have on a half-baked nation-wide high-speed choo-choo system that is experiencing massive cost over-runs before the project is really even off the ground. Economic illiteracy doesn't begin to describe this mentality rather ideological zealotry.

Having read this I thought it was extremely informative. I
appreciate you taking the time and energy to put this
short article together. I once again find myself personally spending way too much time both reading and commenting.

But so what, it was still worthwhile!