Tending to some blog title-related business

Knocking back a few Sierra Nevada Pale Ales after a de-hydrating Hash House Harrier run 10 years ago was our "gateway" moment in getting into the craft beer scene, particularly that of the West Coast hoppy IPA (India Pale Ale) varieties.


Much like the internet, we scarcely knew what we were doing and how we were doing it before latching on to the craft beer scene.


The Brewer's Association released their craft beer economic impact report where they claim that the craft beer industry contributed $33.9 billion to the U.S. economy in 2012.


According to a new analysis by the Brewers Association (BA)—the not-for-profit trade association that represents the majority of U.S. breweries—small and independent American craft brewers contributed $33.9 billion to the U.S. economy in 2012.

The figure is derived from the total impact of beer brewed by craft brewers as it moves through the three-tier system (breweries, wholesalers and retailers), as well as all non-beer products that brewpub restaurants sell.

"With a strong presence across the 50 states and the District of Columbia, craft breweries are a vibrant and flourishing economic force at the local, state and national level,” said Bart Watson, staff economist, Brewers Association. “As consumers continue to demand a wide range of high quality, full-flavored beers, small and independent craft brewers are meeting this growing demand with innovative offerings, creating high levels of economic value in the process.”


Here's a breakdown by state: 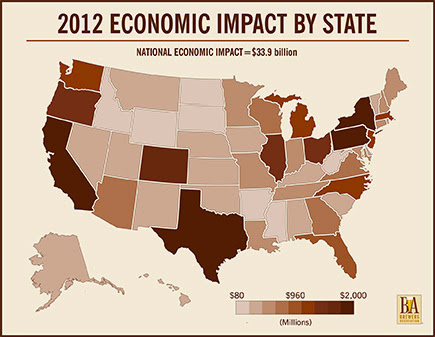 As one would expect, California is lead dog with $4.7 billion contributed to the state economy.


Obviously, the "gross" stats will skew towards the more populous states in the union as we don't really see states like Ohio and Texas being hotbeds for craft beer.

So, let's take a look at the states on a per capital basis: 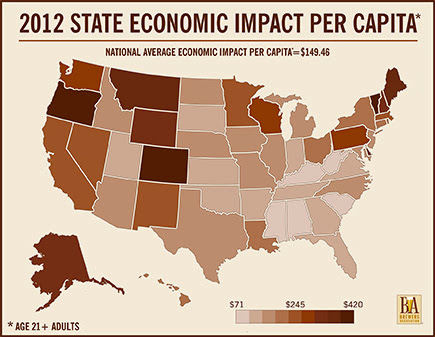 Ah, much better. Oregon, Colorado, Vermont, Maine and Montana, in that order, are the top 5.


Predictably, craft beer is strongest on the West Coast, the interior mountain west and the northeast while the southern and heartland states lag considerably.

How about some more numbers from 2012:

13,235,917 : number of barrels of beer brewed by craft breweries with an estimated retail dollar value of $11.9 billion


As you may know, San Diego is home to a fantastic beer scene so do yourself a favor and give it a shot. If you feel a tad intimidated by the "scene" do what we do and hit up places that a) have a good variety of solid to excellent beers and b) a friendly staff who would love to walk you through the process of ordering a beer that best suits your palate and not be stand-offish pricks about it (we're looking at you Toronado).


Hoffer's in La Mesa, K and B Wine Cellars in Del Cerro and to a lesser extent because they are always so damn crowded, Alpine Beer Co. in Alpine fit the bill. It's the holidays... hit'em up and Merry Christmas from the entire staff here at Beers with Demo.


P.S. What were we thinking...? If Belgian beers are your thing and you aren't going to Brabant in South Park, you're doing it all wrong. And while you're at it, say hi to Max. He'll be there, trust us.

The Neighborhood downtown S.D. has a great selection and good food. Harbor Town Pub in Point Loma has an impressive sandwich line up and always rotates a great selection of local craft beer and usually is featuring a particular craft brewery. This week it's Firestone Walker. Had a Lagunitas Pils yesterday with Argentinian flank steak sammie (great chimichurri sauce.)

Thanks for the recommendations.

And should you happen to venture to North County - there's Churchills in San Marcos and recently 83 degrees in Carlsbad.