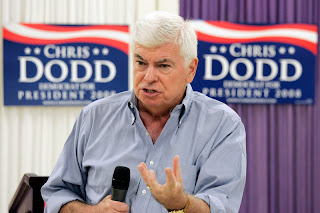 OK, we get it. We get that he’s the chairman of the banking committee that is responsible for holding these hearings but isn’t Chris Dodd the last person on the face of the planet who should be taking a leadership role in a bailout hearing?

Fortunately, a new term has entered the socio-political lexicon that is making it tough sledding for the Detroit 3 to get their mitts into the public till: “Bailout Fatigue.”

And Michael Barone argues here that the structure of the American auto industry is outdated, antiquated and well… totally not cool.

McArdle, native of a similarly bedraggled industrial area (Upstate New York) and an Obama supporter, further argues that the capital invested in keeping the hulk of the Detroit Three operating pretty much as they are, unprofitably, will not be available to those whose startups could morph into the Microsofts and FedExes of the future. We don't know who today's Bill Gateses and Fred Smiths are, but markets sure have a better chance of finding them than the federal government.

Obama's presidential campaign was an entrepreneurial enterprise whose success owed much to harnessing individual initiative through an innovative management structure and creatively using emerging technology. The campaign, as well as the candidate, helped inspire under-30 voters, who preferred Obama by an unprecedented 66 percent to 32 percent margin — as opposed to his 50 percent to 49 percent margin in those 30 and over.

But keeping the Detroit Three in their present form, with their extravagant health care benefits and the union's 5,000 pages of work rules, is an exercise in preserving in amber the America of the past.

And lastly, Bailout Sleuth doing that voodoo that they do so well: naming names – has the latest roundup of banks who have been partly nationalized.

P.S.Post title is a from a quote from Republican senator, Richard Shelby, on the somewhat haphazard approach being applied to the this financial crisis.