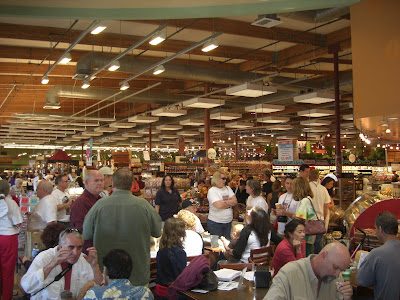 Took us a little while to get to it but we wanted to share some thoughts on the Whole Foods Buy-cott on Saturday. (Roundup of the event can also be found at Temple of Mut, W.C. Varones Blog and The Liberator Today)

A good time was had by all as the right-wing mob descended upon the Whole Foods in La Jolla to bond, shop, eat and make a general nuisance of ourselves. Ostensibly, the buy-cott was to show support for the libertarian CEO of Whole Foods, John Mackey. Show support for a fat cat? You bet, because this fat cat has had the intestinal fortitude to stand up to the established status quo of healthcare reform and aggressively argue for free market reforms of healthcare much to the chagrin of many of his urban liberal patrons who have attempted to organize boycotts of his chain (incidentally, there were a handful of boycotters outside and from the looks of things inside their efforts were failing… miserably).

Anyway, one of the most interesting things of the day was the text of a speech Mackey gave at FreedomFest in Las Vegas a few years back and which was circulating around the assembled congregation of mob-goers. It’s a fascinating read and can be found here. It is an unvarnished critique of what he describes as the “freedom movement”. He doesn’t take time to define what this movement is but in reading his speech we take it to mean a coalition of libertarian and small-government Conservatives plus anyone else opposed to statism and general collectivist government policies, so we can assume we are squarely in Mackey’s self-described camp.

One of his criticisms of the freedom movement is that he believes it to be overly-provocative and he goes all the way back to Ayn Rand’s seminal Atlas Shrugged for deliberately conflating selfishness and self-interest and fast forwards to the 80s movie Wall Street and Gordon Gekko’s famous line, “Greed is Good”. He believes the freedom movement has allowed themselves to be painted into a corner as evil corporatists because of Rand’s original sin which was manifested in popular culture by Oliver Stone’s movie 30 years later.

We have used Gekko’s term on several occasions on these pages, with relish. When we have used it, we hope that we have left a clear signal that our tongue is somewhat in cheek because our use of the term is more a reaction to the general disdain the liberal-Left has for anything worthwhile resulting from the “profit motive” rather than an actual belief in the “virtue of selfishness” that Rand believed. We understand Mackey’s point though we aren’t dropping usage of the phrase solely because it’s so fun to say and it just totally cheeses-off the right people.

Here’s Mackey’s paragraph on profits, greed and the nature of businesses:

I believe that business has a much greater purpose. Business, working through free markets, is possibly the greatest force for good on the planet today. When executed well, business increases prosperity, ends poverty, improves the quality of life, and promotes the health and longevity of the world population at an unprecedented rate. This audience understands these truths, but how many people in our greater society comprehend it? The freedom movement has also poorly defended the social legitimacy of both business and free markets. A new paradigm for business and the free market is necessary — one that accepts the importance of profits, of course, but also one that recognizes that business has legitimate social responsibilities that go far beyond merely maximizing profits.

We’re running a little long so we’ll break things off here at the most awkward of points but we encourage you to read the entirety of Mackey’s piece. Later in the speech he talks about the fights that the freedom movement has mistakenly picked and how they have been hurt by it. We may have some thoughts on that at a later time.

the Whole Foods boycott failed because of George Bush

Sorry I missed it.

Dean,
Thanks for the link. I was pretty sure the boycott would be a failure, but it was great fun to get together with everyone anyway.
BTW, the "single payer" protesters claimed they had not targeted that location because of John Mackey's WSJ article, but only because his was one of many businesses in that vicinity that didn't offer employees health benefits. (I think Whole Foods does offer such benefits, but Margie was insistent that they do so only for management.)

Wow! Great find! Thanks for sharing the speech...and for supporting the effort Saturday.