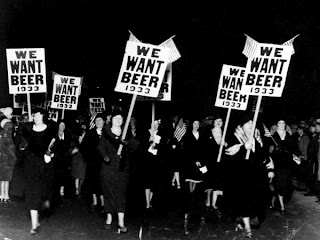 No one has a firmer grasp of events of this nation's past and how they effect subsequent events than George Will. Of course, you would expect that from a baseball man.

Will used his weekly column as a book review of sorts for Daniel Okrent's "Last Call: The Rise and Fall of Prohibition" which is a recounting of how we abolished a private right in order to make America a better place. Aside from a highly dubious federal incursion into personal lifestyle decisions, Will uses the column as a warning for the unintended consequences that will result from the current efforts to make America a better place. A few pull-a-graphs from the column:

Although whiskey often was a safer drink than water, Americans, particularly men, drank too much. Women's Prohibition sentiments fueled the movement for women's rights — rights to hold property independent of drunken husbands; to divorce those husbands; to vote for politicians who would close saloons. So the United States Brewers' Association officially opposed women's suffrage.

Women campaigning for sobriety did not intend to give rise to the income tax, plea bargaining, a nationwide crime syndicate, Las Vegas, NASCAR (country boys outrunning government agents), a redefined role for the federal government and a privacy right — the “right to be let alone” — that eventually was extended to abortion rights. But they did

After 13 years, Prohibition, by then reduced to an alliance between evangelical Christians and criminals, was washed away by “social nullification” — a tide of alcohol — and by the exertions of wealthy people like Pierre du Pont who hoped that the return of liquor taxes would be accompanied by lower income taxes.

(They were.)
Ex-bootleggers found new business opportunities in the southern Nevada desert. And in the Second World War, draft boards exempted brewery workers as essential to the war effort.

The many lessons of Okrent's story include: In the fight between law and appetite, bet on appetite. And: Americans then were, and let us hope still are, magnificently ungovernable by elected nuisances.

Recall the whining we heard earlier this year prior to the passage of Obamacare that with Democrats controlling the Oval Office and both the Senate and the House, America had become "ungovernable".

Hoist a pint this evening and drink a toast to an American exceptionalism that is distrustful of centralized power, cherishes liberty and is, yes, ungovernable.

This reminds me of the do-gooder prop10 Rob Riener tax on cigarettes. You should see what they're doing with the money.

A link is on the way in a post scheduled for later today.