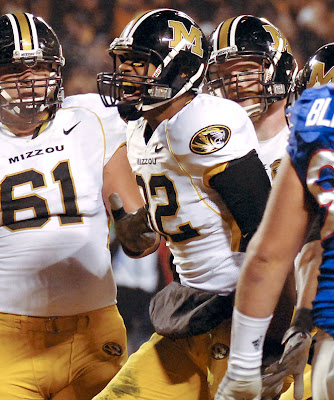 Ol’ Les really made us sweat it out, waiting until the last game of the regular season to fulfill what we thought was his destiny this year when the LSU Tigers lost in triple OT to the Arkansas Razorbacks, 50-48. Now, LSU still had another shot at taking themselves out of the BCS title picture had they won that game they had no business losing with a loss in the SEC championship game next Saturday. (“Hey, Michigan – are you sure you still want this guy?”) There was scant chance of that happening, though, with LSU squaring off against Big Game (not!) Phil Fulmer’s Tennessee Volunteers who themselves escaped in 4 OTs prevailing against Kentucky, 52-50.

We hesitated writing this before the BCS standings came out this evening as there are still a bunch of different possibilities and scenarios yet to be determined but as it stands now, Missouri and West Virginia, who both won impressively yesterday, control their own destiny as they will most likely be ranked 1-2 (or 2-1, no matter). Missouri will have to beat Oklahoma in the Big 12 championship game and WVU will have to beat Pitt in the “Backyard Brawl” for both to appear in the BCS title game.

Failing that……… well, there's an 11-1 team from Columbus, OH that has been sitting around idle all weekend stuffing their faces and watching teams ahead of them fall by the wayside. The Buckeyes, currently ranked 5th will surely move up in the polls through sheer attrition and so will Georgia currently in the 6 hole and which is the strongest possibility it would seem for a 2-loss team sneaking into the title game. And though highly unlikely, let’s see just how far LSU tumbles before we go shoveling dirt on them. 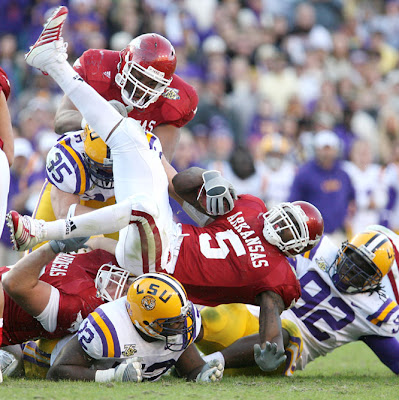 And demonstrating just how devastating their loss to Stanford was, USC at 9-2 and way down at No. 11 in the rankings, has snuck into talk radio conversation of “who is the best team in the country” or “who is playing the best ball in the nation right now” irrespective of their current ranking. And with a win against UCLA next week, it sets up the possibility of an old-school Rose Bowl matchup with the Trojans vs. the Buckeyes in a game that has far more curb appeal at this point than any other possible pairing for the BCS title game. (Not too shabby, eh, Mongo?) And unfortunately for the Trojans it sets up yet another Rose Bowl where they thrash a Big 10 team and wonder but for a batted-down ball here and a broken finger there, what might have been.

A quick word about the BCS in general: Proponents of the BCS/opponents of a playoff system have pointed out the proceedings of the last couple of weeks are proof that the system works because you have a virtual playoff in the regular season. To a degree, they are right. 10 of the top 11 ranked teams all played elimination games this weekend – games that amounted to quarter-final round tournament games. 4 of those teams lost so you have 7 (Mizzou, WVU, OSU, Georgia, VaTech, Oklahoma, USC) teams left with legit shots at the BCS title and 5 (all except Georgia and OSU) of those teams play next week in what amounts to a semi-final game.

This is all goodness but if it shakes out conventionally, the “system” has a very real possibility of producing a championship matchup of Missouri vs. West Virginia and a Rose Bowl of Ohio State vs. USC. Ask yourself which game will have more of a “feel” of a heavy-weight championship match-up and which game will you be more apt to watch? The one played on New Years’ Day on a sun-splashed afternoon against the backdrop of the San Gabriel Mountains or the other game played on a Tuesday night in what by that time will feel like the middle of January and broadcast by that traditional collegiate standard-bearer, Fox?

Oh, may it be! Ohio State v USC in the Rose Bowl!!

People can clown around with Designer National Championships courtesy of the BCS all they want.

Me? I'll take a beautiful 70 degree winter afternoon sitting in Grandaddy watching the Big 10 Champ v. the Pac 10 Champ (esp. when it's Buckeyes and Trojans)go at it for 4 hours -- and have people back east desperately tell me afterwards that what I just witnessed wasn't the best football in America.

Woody and John McKay would have it no other way! - Mongo