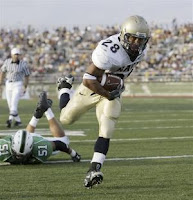 B-Daddy here. Navy's record setting win over North Texas, 74-62, (that's not a basketball score, Navy basketball doesn't score that much) sets them up with a date in the Poinsettia Bowl on December 20th. See you there. This is turning into one of the better Navy seasons in my lifetime. Now, we just have to Beat Army!

Got to watch almost all of the USC-Cal game. Mrs. Daddy and I were hosting a party for teenagers; so once the guests arrived it was broadly hinted that I should make myself scarce. No problemo. I was struck by how inconsistent both teams looked and it wasn't just the constant rain. Pre-season, this was the marquee Pac-10 match up. Tonight, USC's defense looked incapable of stopping Cal, but then Cal would make a mistake: fumble, interception, or stupid penalty and the Trojans were spared. The Trojan offense alternated between unstoppable and inscrutable. I don't know why it happens, but these Trojans seem to lack the intensity and focus of prior years. Dean has a theory, but I really was enjoying the success of USC over the past few seasons.

With Ohio State losing, I imagine there will not be a unanimous number one in the polls tomorrow. But I wonder why Kansas wouldn't be picked for the top spot. They are the only unbeaten team in a BCS division, even with a slightly suspect schedule. No harm in voting for them as number one, because if they beat Missouri and then beat their probable opponent in a Big-12 championship, Oklahoma, who could deny that they are number one. However, given the way the unbeatens have tumbled this year, I am making the following bold prediction: Neither Kansas nor Hawaii, the only remaining unbeatens, will finish the season without a loss. So sure am I, that if wrong, I will refund the cost of your subscription to Beers with Demo. (If only Dean could figure out how to make this blogging thing pay, that would be sweet.)

Its been very frustrating watching both the Trojan and Charger defense under-achieve because of poor coaching.