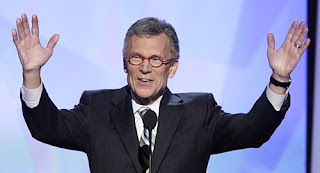 B-Daddy here. Does anyone recall during the campaign how Joe Biden declared that paying taxes by wealthier Americans was patriotic? Well, I do. Since Dean has been hammering the Treasury Secretary and chief tax compliance officer for his past lapses paying Uncle Sam, I wanted to get in on the fun. Turns out one of my least favorite liberals, Tom Daschle, nominee for Health Czar has had some tax problems as well. From the Reuters article:

A Senate Finance Committee report obtained by Reuters showed Daschle paid $128,203 in back taxes and $11,964 in interest for 2005 to 2007, to cover income for consulting, the use of a car service and lower deductions for charitable contributions.

"He didn't think to report it to the IRS. He didn't think of it as taxable income, but it came up during the vetting process," said a congressional aide, who asked not to be identified.

Well how do you like that? Normally, statements such as "I didn't think it was taxable income" get translated by IRS auditors as "income tax evasion." However, see Iowahawk's excellent article, "Ask the Tax Guys," for how this applies to the well connected.

Also, note that Daschle worked as a "consultant" for broadcasting and cable TV company, Intermedia Partners. I am certain he used his vast knowedge of marketing, communications technology, or something like that to earn all that jack. He certainly wasn't a lobbyist, because I read somewhere that our new Prez has special rules about lobbyists and their unseemly stench shall not disturb the smell of pixie dust that now wafts through the White House.

And dang! $128,203 in back taxes! A lot of people would be happy to make that much in a year. But I guess a patriotic soul like Tom Daschle couldn't be a wealthy American, now could he. Because I know that Barack Obama wouldn't fill his cabinet with wealthy, well-connected Wall Street and busines types who weren't patriotic.

Labels: daschle, democrat disregard for rules but I repeat myself, lobbyists, taxes

And I'm assuming that was just for the years he was audited. Is there anything else Mr. Daschle would like to tell us?

Dang . . . I was wonderin' the same thing. But I think it's too much to ask for, that one of our politicians come completely clean. A little "forgetfulness", a little sanitizing, a little sad face and a little apology is the most we'll get I'm sad to say. Besides, The One has absolved him and given him the go to step up to a higher place in our government. sick