Of newspapers and buggy whips 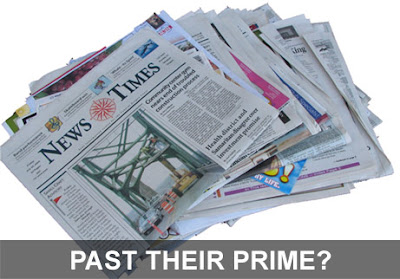 First, full disclosure: We’re newspaper people. That is to say, we vastly prefer to look at hard copy rather than a computer monitor. It’s kind of tough to spread the internet out over the kitchen counter to go along with your cup of coffee and we take no joy in the current state of affairs for the industry as newspapers are what we grew up on.

Times are tough for newspapers these days. With circulation falling off many newspapers are laying-off workers or looking for buyers and some are simply just shutting down. Newspapers are, of course, looking for a hand-out as well. But like many in the financial and automotive industries have found, that bailout business can be a Faustian bargain. A bill has been introduced in the Senate that would allow newspapers to restructure as non-profits with a variety of tax breaks…. and a variety of restrictions.

Cardin's Newspaper Revitalization Act would allow newspapers to operate as nonprofits for educational purposes under the U.S. tax code, giving them a similar status to public broadcasting companies.

Under this arrangement, newspapers would still be free to report on all issues, including political campaigns. But they would be prohibited from making political endorsements.

We suppose that provision would be for that whole conflict of interest thing as elected representatives are the ones keeping the industry afloat but Bailout Nation being what it is, please note that this noble gesture to decouple the newsies from their gracious benefactors comes at the expense of the 1st amendment.

And with respect to the Government bailing out the newspapers we found a piece from The Nationthat not only defends the concept but all but breaks out the pom-poms: Government money will save what was once a proud and regal industry that has fallen on hard times

The news media blew the coverage of the Iraq invasion, spoon-feeding us lies masquerading as fact-checked verities. They missed the past decade of corporate scandals. They cheered on the housing bubble and genuflected before the financial sector (and Gilded Age levels of wealth and inequality) as it blasted debt and speculation far beyond what the real economy could sustain. Today they do almost no investigation into where the trillions of public dollars being spent by the Federal Reserve and Treasury are going but spare not a moment to update us on the "Octomom." They trade in trivia and reduce everything to spin, even matters of life and death.

Now that certainly sounds like an industry worth saving, no? The authors argue in their excruciatingly long piece that newspapers, once free of actually having to turn a profit, thanks to your tax dollars will transform themselves into beacons of journalistic virtue and integrity. And there's more...

Fortunately, the rude calculus that says government intervention equals government control is inaccurate and does not reflect our past or present, or what enlightened policies and subsidies could entail.

We can do exactly that--but only if we recognize and embrace the necessity of government intervention. Only government can implement policies and subsidies to provide an institutional framework for quality journalism.

Just how long does one have to spend in camp to harbor those sentiments let alone be as crazed to actually commit them to print… in public… in broad daylight?

Their argument is that journalism has failed because they choked on their own private enterprise excesses and will take a sudden turn for the better because they won’t choke on the excesses of tax-payer largesse. It’s like your tax dollars are a different color of green – a shade of green that will magically and in the most enlightened way transform the for-profit print journalism industry into the responsible stewards and watchdogs of democracy we knew it to be in the first place because they won’t be able to make any money.

Not that we were in favor of rescuing the newspaper industry in the first place, this treacly cheerleading has soured us even more. There's a time and place for everything and quite frankly the newsies have done nothing of late to convince us they deserve saving.

Wow, as a guy who gets his news from “news radio”, Yahoo, a little “Fox in the Morning” and BwD/ Liberator, I had always looked at the newspapers as a place to find a used car, read the funny papers and find the local teams scores…..and coupons. Now I get funny email, check for cars or property on the net, and hae my local scores on the net.

I wondered why the ‘”buggy whip” phenomenom hasn’t already trumped the local rag. Especially when they’re so out of touch.

This is no different than health care. Free emergency room visits, medicaid, medicare, free prescription drugs...ect. The health care industry has been socialized and back-stopped long ago. As long as there is government involvement, there will be "fat" and ineptitude, greed and corruption.

As I look at the BwD “thinkers”, Dean & Bdaddy, I wonder what the heck they are thinking. Dooooods, you guys have wondered why the government is taking over healthcare, yet you never blogged that health care is already socialized and that IS the problem? This is just a continuation of the socialization of health care. The health care problems of today are the result of socialization, but now that everyones “on the dole” we have no choice but to take it to the limit. This don’t make it right, but it is what it is!

I kicked and screamed at Bob Dole as he waved his prescription drug plan. He was a socialist! I hollered at McCain for backing the bail-out for being a socialist. Obama a socialist? Of course, but just by a friggin’ degree. Can we remember McCain saying the Bush tax plan was "skewed" to benefit the rich?

SO NOW government subsidizes media to the tune of tens of billions of dollars annually through mailing discounts, government advertising, monopoly broadcast, cable and satellite licenses and copyright protection. They appear to be soley in the pockets of the polititians.

So let’s get real, they too have been backstopped and hamstrung by the ties by which they align. That makes them socialized. What about government intervention hasn’t been the demise of everything they touch.

So as I watch the inch-by-inch minutia of the impending apocolypse, you will beg my pardon for my cynical disposition. As American freedoms get stripped away, and the government gets a larger hold, we no longer become free men. The power of the vote will become more eroded and succesion and separatism will be the watch-word of the day. Those will be the new “patriots” whose ideals were founded in our founding documents.

“Our repeated Petitions have been answered only by repeated injury. A Prince whose character is thus marked by every act which may define a Tyant, is unfit to be the ruler of a free people.”

'Dawg, you are probably correct in failing to properly document our already heavily regulated and bureaucratized health care system.

My bumper sticker: "Yeah, our system kind of stinks but at least it doesn't stink as bad the Euros" probably relied too much on the second clause in that sentence.

"President fires CEO" is not a headline that portends good things for this country. That much we are in agreement, I believe.

Neither is "let them eat cake"

The concept that newspaper could not endorse a candidate as a "educational" publication is meaningless. The main endorsements are performed in the chose of articles to be run and the manner in which the article are presented. I quit the LATimes when I found anti-Bush commentary in the cartoon page. Dad

The newspapers are businesses and should be allowed to do business or fail the same as any other business in a capitalist society. If they, the newspapers, are trying to sell a product whose customer base is evaporating then they should go the way of the Dodo! Capitalism is Darwinism applied to business. Let nature take its course!!