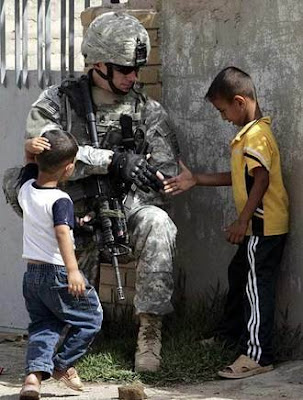 But the proposal would be “dead on arrival” if it’s sent to Congress, Sen. Patty Murray, D-Washington, said.

We don’ t even know where to be begin with this one. It’s like a sick Onion piece.

Let’s get this straight: Obama, a man who wants everyone else to pay for everyone else’s health care, exempts members of the armed forces who have sustained injuries in service to our country and expects them to do that whole free market thing with their own money. That’ll do wonders for recruiting.

The one element of society where we’d be glad to give a little more (and we do) is going to be denied that sacred trust that exists between they and their country if this plan goes through.

Of course, it won’t go through and that’s part of the problem. Murray’s right –this abomination doesn’t have a prayer – so why even float it? What could the administration be thinking? Are they too tired or just plain incompetent? Or maybe just too busy ginning up their next attack on Rush Limbaugh to realize this one slipped through the cracks?

That we have an Administration that is this blatantly callous to the men and women in our armed forces is one thing. That they are this totally oblivious to their own callousness is entirely another.

Maybe they're hoping to make military volunteer numbers drop, so they have an excuse to start up the Obama Corps to "help where the military doesn't have the manpower"?

Dean,
Such a policy would also be incredibly short sighted, even given Obama's other policy goals. The service-related injury benefit reassures potential employers that hiring a vet won't saddle them with higher health care premiums. This helps transition the veterans into the workforce where they eventually use private insurance anyway. The veterans do so because navigating the VA health care bureaucracy is difficult, but at least it exists as a safety net. Such an amazingly short-sighted plan could only be thought up by an administration that has plans to manage health care for everyone, and wants to free up government resources to do so.