Freedom Week (UPDATED... with important information regarding another "week") 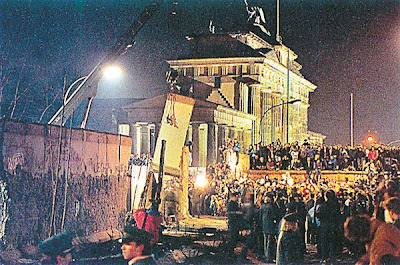 At the Brandenburg gate the East German border guards had shooed the weekend’s noisy celebrators off the Wall. But the guards weren’t carrying guns anymore and were beginning to acknowledge their audience and even ham it up a bit. Somebody offered a champagne bottle to a guard and he took a lively swig. Somebody else offered another bottle with a candle in it, and the guard set the candle on the wall and used a plastic cup to make a shield around the flame.

The people in the crowd weren’t yelling or demanding anything. They weren’t waiting for anything to happen. They were present from sheer glee at being alive in this place at this time. They were there to experience the opposite of the existential anguish which has been the twentieth century’s designer mood. And they were happy with the big, important happiness that – the Declaration of Independence reminds us – is everybody’s, even a Communist’s unalienable right to pursue. 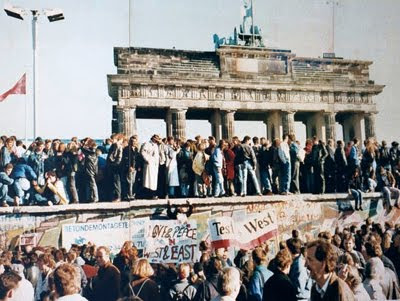 The world’s most infamous symbol of oppression had been rendered a tourist attraction overnight. Poland’s political prisoners were now running its government. Bulgaria’s leadership had been given the Order of the Boot. The Hungarian Communist Party wouldn’t answer to its name. Three hundred thousand Czechs were tying a tin can to the Prague Politburo’s tail. And the Union of Soviet Socialist Republics was looking disunified, unsoviet and not as socialist as it used to. What did it mean? The Commies didn’t seem to know. The Bush administration didn’t either. And you can be certain that members of the news media did not have a clue. Ideology, politics and journalism, which luxuriate in failure, are impotent in the face of hope and joy. 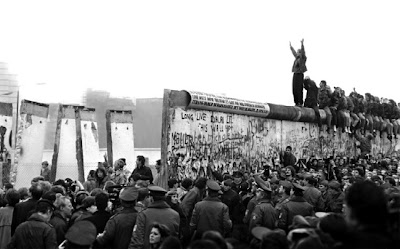 That from P.J. O’Rourke from his book Give War a Chance on the fall of the Berlin Wall.

Today marks the 20th anniversary of perhaps the most significant moment in the 20th century. The bulwark and symbol of an ideology that was directly responsible for the deaths of tens and tens of millions of people had been both physically and figuratively toppled.

And O’Rourke’s assessment then holds true today as 20 years on, we still don’t think that the punditry, many of whom were apologists for this virulent strain of collectivism, knows what to make of the collapse of communism and the fall of the Soviet empire. And apparently, neither does our President who has declined to participate in the festivities.

Because of the short shrift we believe this monumental event is given and with Veteran’s Day on November 11th, Beers with Demo is proclaiming this coming week as Freedom Week. Join us in celebrating, won’t you?

Wow. How could we forget this one. Folks, it's Ronald Reagan’s “tear down this wall” speech from 1987.

And to think that things could not get any better, Freedom Week is divinely coinciding with San Diego Beer Week. There will be things going on all over town but we will be doing most of our hanging at the K&B Wine Cellars where they will be featuring a different San Diego brewery every evening. Tonight: Green Flash Brewery.

Gee... wonder why Obama isn't there?

Because "freedom" isn't his trip.

Hi !.
might , perhaps curious to know how one can manage to receive high yields .
There is no initial capital needed You may start to get income with as small sum of money as 20-100 dollars.

AimTrust is what you need
The firm incorporates an offshore structure with advanced asset management technologies in production and delivery of pipes for oil and gas.

Its head office is in Panama with offices around the world.
Do you want to become a happy investor?
That`s your choice That`s what you desire!

I`m happy and lucky, I started to take up income with the help of this company,
and I invite you to do the same. If it gets down to choose a correct partner who uses your savings in a right way - that`s AimTrust!.
I make 2G daily, and my first investment was 500 dollars only!
It`s easy to start , just click this link http://fafysytas.freewebportal.com/uqisufu.html
and lucky you`re! Let`s take this option together to become rich

Hi !.
You re, I guess , probably very interested to know how one can manage to receive high yields .
There is no initial capital needed You may start to receive yields with as small sum of money as 20-100 dollars.

AimTrust is what you thought of all the time
The firm represents an offshore structure with advanced asset management technologies in production and delivery of pipes for oil and gas.

Its head office is in Panama with offices everywhere: In USA, Canada, Cyprus.
Do you want to become really rich in short time?
That`s your choice That`s what you wish in the long run!

I`m happy and lucky, I began to get real money with the help of this company,
and I invite you to do the same. It`s all about how to choose a correct partner who uses your money in a right way - that`s the AimTrust!.
I earn US$2,000 per day, and what I started with was a funny sum of 500 bucks!
It`s easy to start , just click this link http://berygypyl.lookseekpages.com/fehaqe.html
and lucky you`re! Let`s take our chance together to get rid of nastiness of the life

Good day, sun shines!
There have were times of hardship when I felt unhappy missing knowledge about opportunities of getting high yields on investments. I was a dump and downright pessimistic person.
I have never imagined that there weren't any need in big initial investment.
Now, I'm happy and lucky , I started take up real income.
It gets down to select a correct partner who uses your money in a right way - that is incorporate it in real deals, parts and divides the income with me.