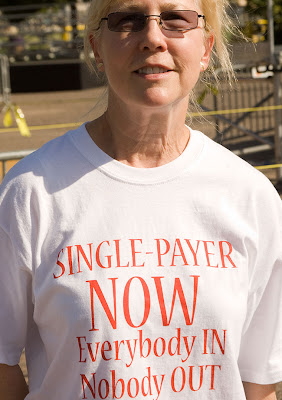 It is protest day, for the Left and the Right, on Capitol Hill.

Protesters were arrested, one by one, and dragged out of his office amid chants of "Everyone in and no one out, universal healthcare now!" and "Represent Connecticut, not AETNA!"

The whole affair, from occupation to final arrest, lasted 40 minutes.


Maybe its just us but that war cry: “Everybody in and Nobody out!” has got to be the worst political sloganeering of all time.

The liberal-Left, they of the former “Keep your politics off my body” form of governance have been pushing government-managed healthcare for years and that is the best they could come up with?

It has such a totalitarian anti-choice ring to it, no?


But why stop there – why not just strip bare the veneer of inclusiveness and expose the statist mentality for what it is?


“If you love going to the dentist, you’ll absolutely cherish Obamacare”

“Healthcare: we’re from the government – now where was it that you needed surgery?”

“Healthcare: Now shut up and get into that boxcar!”

We welcome other pithy slogans from our readers.


UPDATE #1: Temple of Mut has a nice round-up of the days events in our nation's capital, here.

In case you were not aware, we already have single payer health care in this country, and we have had it for more than 40 years. The only problem with it is that you have to be 65 to be eligible. But isn't it interesting that when you compare US health care statistics with other countries, the one area where our health statistics are as good or better than everywhere else is for people over 65.

Medicare is going broke. There is ample evidence which I have documented in this blog that doctors are no longer taking Medicare patients because they are no longer being compensated what it costs to provide that treatment.

Don't get me wrong - I'm all for healthcare reform - just not of this variety which addresses none of the core issues that result in the problems of our healthcare system.

I want tort reform which the CBO says will save $50 bil but which is a non-starter as even the Democrats admit they are in the back pocket of the trial lawyers.

I want portability across state lines.

I want to be able to customize my healthcare coverage, i.e. I don't want to be covered for things like alcohol/drug counseling which serve only to drive up my premiums. I wish to choose to pay for things like that and many others out of pocket. I think this "skin in the game" approach lead to healthier life decisions all-around.

I have an epically huge problem with a government mandate to purchase health insurance.

But mostly, I want to remove as much as humanly possible, the government's involvement in my healthcare decisions.

Remember the privacy argument made to buttress Roe v. Wade and remember "Keep your politics off my body".

Joe, if I don't rebut any counterpoints you make it's not that I'm ducking you its just that I'm contributing to the Las Vegas casino workers' retirement fund this weekend and (hopefully) won't be near a computer.

Have a great weekend.

Gold-Plated Witch On Wheels had an article that I used in one of my own that referred to the whole TORT issue.

(quote)
"Section 2531, entitled “Medical Liability Alternatives,” establishes an incentive program for states to adopt and implement alternatives to medical liability litigation. [But]…… a state is not eligible for the incentive payments if that state puts a law on the books that limits attorneys’ fees or imposes caps on damages.
(close quote)

I would be interested in knowing what data was used to cast the US health care industry (for lack of a better term) in such a bad light. Was it nations who have a different view of "human" status in regards to longevity outside the womb? Was it nations who self-reported without oversight? Was it nations where those with means send their ill to the US for treatment?

"Everybody in, nobody out" is the slogan for North Korea, right?

I'm gonna steal this for the 'Post and link back to you.

You can question the statistics on life expectancies and other health data in other countries if you want. And you can blame all our problems on tort lawyers if you want. But the fact is that every other advanced nation has gone in a different direction from the one you all are advocating, and they are all getting better results than we are. And when you compare the results of our own private patchwork system with our own socialized systems, Medicare or the VA, you see that our own government-run system also produces better results than our private system. We already have government-run healthcare in this country, and nobody complains about that system the way that they complain about the private insurance companies.

Mr Markowitz, what say you to my final paragraph in my previous comment?

What I say is that I think it is funny that a lot of opponents of health care reform say out of one side of their mouth that they do not want the government involved in the health care system, and then say out of the other that we should not be talking about trying to find cost savings in the Medicare program. Either you should support the abolition of Medicare AND Medicaid AND the VA, which I do not hear any politicians suggesting, or you should be working constructively with supporters of reform to help fix those programs and put them on a better financial footing. But you can't be against government health care and then at the same time try to scare seniors by saying that reformers want to try to find some cost savings in the program.

Same goes for SocSec. Medicaid/welfare? Cut them off. They're unconstitutional. VA? I wonder what that "V" stands for. Could it be part of that "provide for a national defense" clause? They did their thang, now we do ours. They earned it.

Davey Crockett has something to say about today's government "entitlement" programs. You should check it out. You might learn a few things about the Constitution.

KT - I think that "Everybody in, nobody out" was the motto of East Germany.

Some say that North Facial skin Backpacks [URL=http://www.nfoutletonline.net/#921]north face outlet[/URL] pricey. Correctly, it might seem pricey due to the appearance and superior. Nonetheless, you will be surprised if you purchase [URL=http://www.nfoutletonline.net/#921]north face outlet[/URL] person because it will definitely always be affordable.