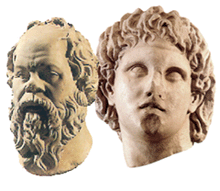 So, why haven’t we Americans bought healthcare reform hook, line and sinker to this point? Hasn’t the President adequately explained it to all of the unwashed masses? After all, it’s really in our best interest, isn’t it? Universal coverage, even for those with pre-existing conditions… how could one not like something like that?

The founders’ immersion in ancient history had a profound effect upon their style of though. They developed from the classics a suspicious cast of mind. They learned from the Greeks and Romans to fear conspiracies against liberty. Steeped in a literature whose perpetual theme was the steady encroachment of tyranny on liberty, the founders because virtually obsessed with spotting its approach, so that they might avoid the fate of their classical heroes. It has been said of the American Revolution that never was there a revolution with so little cause. Whatever his faults, George III was hardly Caligula or Nero; however illegitimate, the moderate British taxes were hardly equivalent to the mass executions of the emperors. But since the founders believed that the central lesson of the classics was that every illegitimate power, however small, ended in slavery, they were determined to resist every such power. Even legitimate authority should be exercised sparingly, lest it grow into illegitimate powers.

(italics, ours… and we love that line because after all our reading on the subject of the American revolution it still appears the most improbable and inexplicable of revolutions. A revolution led by the landed and mercantile class who had the most to lose. It made no sense.)

Alas, embrace that characteristic of American exceptionalism that is deep suspicion towards a centralization of power.

The statist knows that he has time on his side so that his incremental agenda represents not revolution but evolution.

The Republicans can rightly be held responsible for not attempting to enact some type of meaningful health care reform that would increase freedom, choice and options for Americans during the 6 years where they held power in the executive and legislative branches but we are all perfectly in our right to say “No” now to this gross overreach of power.

(Welcome readers from W.C.'s place. Would this qualify as a Varone-a-lanche? Please feel free to bop around a little and please, definetely feel free to visit again.)

For Halloween I once went as Julius Caesar. I was on a bus going to the party. Someone asked me who I was. Before I could reply someone said: "He's that pizza guy!" Then 4 people yelled "Pizza, pizza."

The classics might live on but not as you expect.

Harrison, I've got an idea:

Similar to pearls of wisdom in fortune cookies how about nuggets of rationalism in wraps and/or strombolis?

Dude, I think we've got a winner on our hands.

I did get something good in a fortune cookie once: