How the left stopped worrying and learned to love the drone 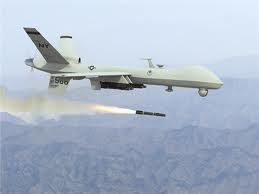 During the first term of this current administration, we ran a series alternately titled “O > W” and “Constitutional Republics Are, Like, Hard” to illustrate just how closely President Obama’s domestic and foreign policies had mirrored that of his predecessor and to illustrate how often those policies represented an extension of executive power beyond that of Bush. (If you decided to go to the link, you will see there was no shortage of material)

Since the killing of Anwar-alAwlaki back in September of 2011 via a drone strike in Yemen, the practice of killing Americans overseas has been public knowledge… well at least as public as a compliant 4th estate would make it public.

Just last week, however, against the backdrop of the CIA Director confirmation hearings for John Brennan, a leaked white paper from the Department of Justice gave legal justification for the administration to kill Americans oversees with what we will feel free to describe as virtually zero oversight, due process and transparency. This, at last, put this long-overdue debate on the front burner and certainly, Peter Baker’s conveniently-timed Saturday commentary in the New York Times has finally given Paper-of-Record voice to our O > W contention.

The lede from the article:

Four years into his tenure, the onetime critic of President George W. Bush finds himself cast as a present-day Mr. Bush, justifying the muscular application of force in the defense of the nation while detractors complain that he has sacrificed the country’s core values in the name of security.

Oh, that he were as we have seen the establishment left in this country both in the press, government and celebrity, rush to the president’s defense with the lame defense that the president knows best.


And Baker makes the point of Obama’s use of drones as essentially being lazy; a point we have made for years:


By emphasizing drone strikes, Mr. Obama need not bother with the tricky issues of detention and interrogation because terrorists tracked down on his watch are generally incinerated from the sky, not captured and questioned. By dispensing with concerns about due process, he avoids a more traditional war that he fears could lead to American boots on the ground.


Glenn Greenwald penned an excellent column exposing the hackery of the left and the fact that progressive fans of the Obama drone killing program need to apologize and thank McBushChimpHitler, Cheney, Rumsfeld and the rest of the gang… because you can’t get to assassinating Americans from above without first going through warrantless wiretaps and enhanced interrogations. It’s all about process, you see, to achieve lack of due process.


But back to the “I (heart) Barack” defense…

Look, I voted for President Obama because I trust his values and his judgment. And I believe that he's a fundamentally responsible actor. Without gratuitously slamming ex-President Bush, I think he displayed extraordinary lapses in judgement in executing his primary responsibility as commander in chief, and put troops in harms way imprudently. President Obama would have exercised better judgment and he has exercised better judgment. The way it stands now, the drone program is exclusively in the domain of the executive. Their protocol, their judgment. So yeah, I feel a whole lot better about the program when the decider, so to speak, is President Obama.

That’s charming… it really is. And it also demonstrates an embarrassing lack of understanding as to what is required of a constitutional republic with its checks and balances, oversights and separation of powers.

What is wrong with the “I trust Obama (more)” line of reasoning is that precedent has now been set for all other future presidents. This logic locks in a very short term perspective based largely on a cult of personality that completely ignores the long-term ramifications of a single person having the go/no-go on terminating U.S. citizens without any oversight, process, review or transparency.

Hell… we just wrote “.. long-term ramifications…” for something that has happened 3 times already.


Saying you trust Barack Obama more than you trust George W. Bush or Mitt Romney is fine for matters such as the economy or tax policy but for matters of life and death and given the flimsy pretexts and controls that Justice Department legal document lay out for justification, you are effectively gutting the 4th amendment. The truism that (ideally) we are nation of laws and not of men seems to be lost on many of these folks.

Besides, Obama has only 4 more years left. We can’t wait to see what happens when someone as obviously less-saintly than he possesses these extraordinary powers and what he will do with them.

And we can’t wait to see what hacks like Kristal Ball will say about it then, as well.

When even Conan sees the problem (see the clip at 1:55 in the video here) Team O should realize they have a problem.

Excellent article. Keep posting such kind of information on
your blog. Im really impressed by it.
Hey there, You've performed a great job. I'll definitely digg it and for my
part recommend to my friends. I am confident they'll be benefited from this site.