How to effectively lose the gun control debate 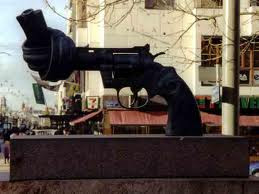 
The following two stories appeared at Hot Air and got us to thinking about a concept with respect to gun control. As second amendment supporters, it feels like we are always on the defensive with respect to our gun rights when these two examples ably demonstrate why it is we should be turning the tables and going on the offensive to where, we are asking the questions.

Safe zones.... Charmed, we're sure. How patronizing and patriarchal. Dude just oozes condescension but he'll get a pass from feminists because, well, by and large, your modern day, garden variety feminist is a hypocrite perfectly willing to overlook bad behavior if the pol has the correct letter after his name.


Another question to be asked of controllers is why should we trust a pol's ability to craft "sensible" gun control legislation when "mistakes" like 4th amendment-violating house searches somehow find their way into the weeds of the text?

Responding to the Newtown school massacre, the bill would ban the sale of semi-automatic weapons that use detachable ammunition magazines. Clips that contain more than 10 rounds would be illegal.

But then, with respect to the thousands of weapons like that already owned by Washington residents, the bill says this:

“In order to continue to possess an assault weapon that was legally possessed on the effective date of this section, the person possessing shall ... safely and securely store the assault weapon. The sheriff of the county may, no more than once per year, conduct an inspection to ensure compliance with this subsection.”

In other words, come into homes without a warrant to poke around. Failure to comply could get you up to a year in jail.

For their part, the two co-sponsors say they either don't know how that clause got into the bill or that they didn't get into the specific details of the bill. And they both acknowledge that clause probably represents a violation of the constitution and therefore probably a mistake. The freaking bill is only 8 pages long! They wrote the damn thing!


Oops. How did that get in there? It must have been a mistake.


If you think for a moment that a clause giving the sheriff the power of warrantless and random house searches was a mistake, we've got some excellent beachfront property in Omaha we would love to sell you.

Gun controllers continue to be their own worst enemy making it more and more difficult to pass their legislation because of overreaching stunts like this and simply idiotic statements like the one above. But keep digging, boys.


We've said it many times before and these two examples above bear out the fact that the controllers' agenda isn't about public safety or cracking down on gun violence, only control. Concepts like freedom and liberty blow the statist mind. Though they are perfectly fine with it on a personal basis, they are appalled that you would have the temerity and uncouthness to wield it yourself.

What could you recommend about your put up that you just
made a few days in the past? Any positive?

You forgot the part about how they said it was a mistake because it wouldn't fly...right now.

In the future, who knows?

Wow, that's what I was seeking for, what a information! existing here at this blog, thanks admin of this web site.