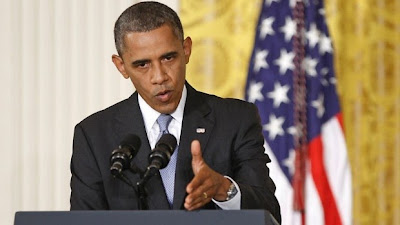 At his press conference yesterday, the President was questioned with respect to his delaying by one year the employer mandate whereby businesses of over 50 employees would have to provide federally-approved health insurance plans for the same.


Here was his response:


With respect to health care, I didn’t simply choose to delay this on my own. This was in consultation with businesses all across the country, many of whom are supportive of the Affordable Care Act, but — and who — many of whom, by the way, are already providing health insurance to their employees but were concerned about the operational details of changing their HR operations if they’ve got a lot of employees, which could be costly for them, and them suggesting that there may be easier ways to do this.

Now what’s true, Ed, is that in a normal political environment, it would have been easier for me to simply call up the speaker and say, you know what? This is a tweak that doesn’t go to the essence of the law. It has to do with, for example, are we able to simplify the attestation of employers as to whether they’re already providing health insurance or not. It looks like there may be some better ways to do this. Let’s make a technical change of the law.

That would be the normal thing that I would prefer to do, but we’re not in a normal atmosphere around here when it comes to, quote- unquote, “Obamacare.”

We did have the executive authority to do so, and we did so. But this doesn’t go to the core of implementation.

No. No he doesn't have the authority to unilaterally delay implementation of policy he signed into law.


And to imply blame for this on the opposition party is pathetic and weak-minded. Republicans were froze out of the negotiations during the crafting of this monstrosity but now they are being blamed for the President's unconstitutional unilateral action as if they are now suddenly required to bail the man out of the mess of his own making.


But back to the "consultation with businesses" clause... It doesn't exist.


Nowhere in either the law (“ObamaCare”) nor the Constitution is authority granted by which the President can just start winging it and choose which parts of the law he wants to implement and choosing to whom the law will or will not apply. This power is simply not granted to a single person.


The person you most likely voted for President did not consult with you, rather he consulted with the monied interests of this country before making this decision. There are many names for this government-corporate hand-in-hand arrangement: corporatism, economic fascism, Peronism… call it what you want but it is lawless and it is un-constitutional and does not belong whatsoever in the governance of this country. We cannot wait until there is an (R) back in the Oval Office whereby fidelity to the Constitution and rejection of corporate interests will matter again with all the cool kids.


3-1/2 years after ObamaCare became law, the man is diminished to unlawful actions and blaming others for the already fantastic failure of his “signature” piece of legislation.

Parting thought: perhaps the best case in favor of the Constitution is to protect us against those who do not think we need it anymore.

Wait, we have a Constitution? Who knew?