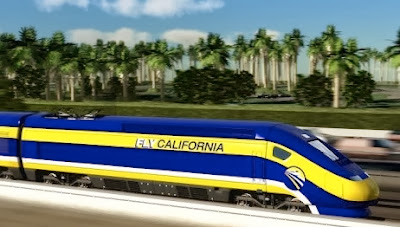 From the San Diego Union-Tribune:


A Sacramento judge on Monday tore up California's funding plans for its bullet train project in separate orders that could force the state to spend months or years redrawing its plans for the $68 billion rail line.

Judge Michael Kenny rejected a request from the California High-Speed Rail Authority to sell $8 billion of the $10 billion in bonds approved by voters in 2008, saying there was no evidence it was "necessary and desirable" to start selling the bonds when a committee of state officials met last March.

He said the committee was supposed to act as "the ultimate 'keeper of the checkbook'" for taxpayers, but instead relied on a request from the high-speed rail authority to start selling bonds as sufficient evidence to proceed.

In a separate lawsuit, Kenny ordered the rail authority to redo its $68 billion funding plan before continuing construction, a process that could take months or years. He had previously ruled that the authority abused its discretion by approving a funding plan that did not comply with the requirements of the law. The judge said the state failed to identify "sources of funds that were more than merely theoretically possible."

Judge Kenney ruled that the Rail Authority in having completed environmental clearances for only 28 miles in the Central Valley violated the terms of Prop. 1A (the approved proposition of 2008 that got the wheels moving in this whole sorry mess) that required all the environmental clearances be in place as well as specifying the sources of funding for the first operable segment of the high speed line.


Still, Kenny stopped short of blocking the project altogether, and rail authority officials characterized Monday's rulings as a setback rather than a fatal blow.

"Like all transformative projects, we understand that there will be many challenges that will be addressed as we go forward in building the nation's first high-speed rail system," authority board Chairman Dan Richard said in a written statement.

This may not be a death blow but these two rulings definitely put high-speed choos on the ropes. And there may not ever be a death blow, per se, rather death by a million cuts.


We already know that the official estimate of $68 billion was accomplished in disingenuous fashion by Governor Brown’s people, slashing the electrical infrastructure and the actual choo-choos from the project (another violation of Prop. 1A). What happens when that bit of budgetary chicanery is made fully public? What then? Where will the money come from to finish the job?


And what of the other suits that are still pending? And remember, the environmental and logistical delays being experienced already by this project are occurring on what should be the easy part of this. It’s the flat, relatively sparsely populated Central Vally not the Tehachapi Mountains nor the congested Bay Area or L.A. Basin.


Brown’s in-state allies and the statist acolytes both in California and across this country are playing a waiting game and hoping to establish just enough forward momentum and progress that the project becomes terminal and can no longer be walked away from regardless of the absolute financial black hole it becomes… and it will.


Short of a radical re-structuring of the current one-party rule that currently exists in California, count on Cali’s high-speed choo-choos to be far and away the most disastrous public works program this country has ever seen. In a sense, it already is.

Is this not the most delicious ruling ever when it comes to the Statists? They've created a morass of laws and regulations so complicated that even they can't get anything done. Global Warming, here we come!

i think it is very useful for us.thanks for share.
DVR KIT