Since we didn’t get around to any sort of TIME magazine-like “Person of the Year” award, it

was decided to come up with something similar yet altogether different and… much more fun. Without any further ado, its time to kick off Beers with Demo’s first annual “skunkies” (because what’s the worst thing that could happen to your beer… besides spilling it?)

Like Time Magazine’s this award is certainly not an “honor” but unlike the Time award there is a “standard” of sorts in the way of incompetence, ineptitude, cowardice, skullduggery and general god-awfulness that needs to be attained by each of our nominees.

Ladies and Gents, the nominees:

The NIE Report on Iran’s Nuclear Weapons Program: The NIE is pretty darn sure that Iran halted its nuclear weapons program back in ’03 and won’t start it up again… until they do. From the people who brought you the botched Iraq WMD assessments comes this report with a enough wiggle room in it to do the Twist. Of course, this was spun as a huge PR victory for Mahmoud Ahmedinejad over imperialist neo-con-in-chief, George Bush (our thoughts on this matter here) but at the end of the day, we would just like to remind everybody that whatever certainty can be extracted from this report… its still, as the very title would suggest, just an estimate.
.
.
The Amnesty cabal: From President Bush to the New York Times, Wall Street Journal and Weekly Standard and to members of Congress and pro-illegal alien groups…. the whole lot of them are

getting thrown together for this. For their tireless and unceasing efforts to make the illegal legal and the unjust just for non-citizens, we’ve nominated the cabal for this year’s skunky. You see, what the cabal has never understood is that the failed Amnesty legislation wasn’t just some public policy initiative that could be routed around Capitol Hill and be subjected to deals, compromises and general wonking as virtually all other legislation is. The Amnesty legislation involved a fundamental concept of right and wrong and of justice… real justice not this poppy-cock notion of “social justice” for which many lefty groups within the cabal clamor. Thusly, the average American’s own moral compass was revealed to be much truer than that of our elected leaders. (For archived posts, search: “Amnesty”) 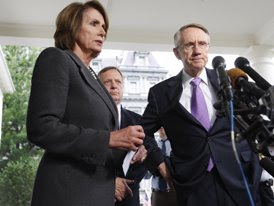 Harry Reid/Nancy Pelosi: This two-headed hydra swept into power this past January promising to bring change to Capitol Hill. Performing a bean count of their “accomplishments” or attempting to quantify just how it is they changed the culture of D.C., however, would be too restrictive and narrowly focused…. one has to step back and take in the big picture with respect to these two. So let’s just say that Harry and Nancy enjoyed broad bi-partisan support for making the collective legislative bodies over which they preside some of the lowest rated ev-ah in terms of public approval. Incompetence of this magnitude is never accomplished through mere negligence but only through a day-in and day-out effort to secure failure and defeat at every turn. Harry, Nancy… Congratulations on your nomination! (wild applause)
.
.
The Mitchell Report (on steroid and banned substance use in baseball): Like the Amnesty cabal, this skunky nomination casts a wide net to include anyone who had anything to do with this sad excuse of a “report”. We wondered if it ever occurred to MLB commish Bud Selig that directing former Senate majority leader, George Mitchell, to generate this report might not be such a hot idea since Mitchell has a minority ownership stake in the Boston Red Sox… and when, after the fact, there are 15 Yankees and only 2 Red Sox named in the report. And the athletes that are now coming forward to admit to steroid use have provided some of the lamest excuses we have heard in ages. Epitomizing this is ESPN analyst and former major-leaguer, Fernando Vina who made such a tortured explanation as to his steroid usage on ESPN last week, it was difficult to watch…. “…it wasn’t like I was taking steroids to hit more homeruns or anything…” Dude, shut up! 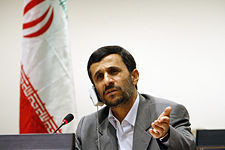 Mahmoud Ahmedinejad: You didn’t think we’d forget about this guy, did ya? In quite an eventful weeklong stay here in the U.S. which included speeches at the U.N. and Columbia University where by inference he claimed Iran had a cure for AIDS, brother Mahmoud catapulted himself to the top of the International Bad Actor’s Club, an august body that counts Hugo Chavez, Fidel Castro and Kim Jong-Il among dues-paying members. (For archived posts search: “Mahmoud”)

That’s it. Get ye to the polls and as always….. write-ins are highly encouraged.

No me gusta. - Mongo

Too easy a target.

Hey, I hooked up your Mormon tabernacle choir suggestion. Boy, they can really sing.

Heres a cast since we're not confining it to an individual:

The gruesome twosome of Larry Burkhead and Howard K. Stern along with the parade of circus freaks that included the Wacko Judge, the Trailer Trash Mom, ect. and not once reflecting on the Shakepearian tragedy of the death of the most beautiful woman to grace our planet.

And the poor son, died not of a drug overdose, but of self mortification. (the medical term for dying of embarrassment) His mother was Anna Nicole Smith for Gods sake.

Then, just when we thought we had enough of the saga, (only because they stopped showing Anna clips with the story) the media became giddy with the prospect of Birkhead and Stern being best friends…with benefits. While these guys were stuffing pills down Miss America’s throat, we have to learn they were stuffing their own pie holes with each other. I guess we should have seen it coming.

I vote these guys for the destruction of a devastating beauty

One more write in before I cast my vote:

How about the media fuss over our national treasures, Brittany, Lindsey, or Paris showing off their cooters like it was the poor-boy sandwich display at the local submarine shop? C’mon this trio or the media fuss should make it on the skunkies list by shear aroma.

Oh no, It’s a national crisis; lets pass a bunch of new laws!

what no more "write-ins"?

Dean,
I loathe the mealy-mouth wording of the NIE. Also, the MSM has made much ado about nothing over the report. But when you get right down to it and analyze its contents, it is a fairly reasonable report. BTW, for the casual reader, using this report to argue that Iran is NOT moving towards eventual nuclear weapons capability is totally unwarranted. Space precludes a full analysis of why. Any estimate of this magnitude is going to need caveats to be interpreted correctly. Anyway, my vote is to de-nominate (is that a word?) the NIE.

B-Daddy, Your point is well-taken. Similar to the "Mitchell Report" nomination, the "NIE Estimate" nomination was meant as a characterization of the whole affair: The wording of which left it open to any number of interpretations, the way it was spun (incorrectly) by the press, the losers both here and abroad attempting to make political hay with it... basically anything and anybody related to the report was being sent up for this nomination.

Additionally, even if I wanted to take it down, once the first vote is cast, you cannot edit/delete any of the choices.