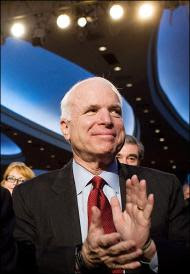 B-Daddy here. Yesterday I filled out a form on the California Secretary of State web site to change my party affiliation from Libertarian to Republican. I am letting you know in the interest of full disclosure. For some time, I have became convinced that the Libertarian Party's lack of serious purpose was a huge obstacle to achieving libertarian outcomes in America. I was slow to do this because one does not make such a change lightly; especially after 32 years of both membership and affiliation.

Today, John McCain spoke to conservatives to heal rifts in the Republican party with the conservative base. But I wondered what he would say that might also convince libertarians that he should be their candidate as well. He started out great:

"...I share with you that most basic of conservative principles: that liberty is a right conferred by our Creator, not by governments, and that the proper object of justice and the rule of law in our country is not to aggregate power to the state but to protect the liberty and property of its citizens. And like you, I understand, as Edmund Burke observed, that "whenever a separation is made between liberty and justice, neither . . . is safe."

For me this is the red meat of libertarianism, the concepts of the Declaration of Independence. Government is there to protect our rights, not to make us better, not to make us holy (only the Almighty can do that), and certainly not to subjugate some for the benefit of others, setting factions against each other. And in their hearts, this is what most Americans really believe.

"I believe today, as I believed twenty-five years ago, in small government; fiscal discipline; low taxes; a strong defense, judges who enforce, and not make, our laws; the social values that are the true source of our strength; and, generally, the steadfast defense of our rights to life, liberty and the pursuit of happiness, which I have defended my entire career as God-given to the born and unborn."

More good stuff. Now some libertarians, but not I, believe in freedom of choice on abortion. But if we take the view that human life in all its forms is sacred, then we can not tolerate abortion. (BTW, I oppose the death penalty and euthanasia for similar reasons.)

Further in the speech, he promised tax cuts which I also applaud, especially if he can keep his commitment to lowering spending and earmarks. I am not so sure about the remarks regarding surveillance powers. One of my biggest criticisms of the Bush administration was the extra-legal manner in which they conducted the war on terror. If the war on terror was important, then it should have been important enough to pass laws that guided certain aspects of its conduct, like surveillance. Further, it should have been important to fund a judiciary of sufficient size to ensure that this effort was conducted within the bounds of law and the constitution. Bush's failure to do so undermined public support for necessary efforts. I am not sure if the current bill provides the needed oversight from the judiciary. (How federalist of me.)

However, I think many libertarians will not be happy with his intent to continue to fight the war in Iraq, rather than withdraw. I personally believe that the surge has been an important component that will hopefully move us towards achieving our strategic goal, a free and democratic Iraq. (BTW, I also applaud Senator McCain's criticism of Secretary Rumsfeld. In the middle of a huge and important strategic gamble, to change entire political landscape in the Middle East; Rumsfeld made a side bet that he knew more Colin Powell about the size and shape of forces needed to win a land campaign in that region.) Unfortunately, we have a long slog ahead due to the initial mismanagement of the occupation.

McCain did not address some of the real reservations libertarians have about him. As Reason magazine stated in an unflattering article last April:

"Like almost every past McCain crusade, from fining Big Tobacco to drug-testing athletes to restricting political speech in the name of campaign finance reform, the surge involved an increase in the power of the federal government, particularly in the executive branch."

For me the most difficult issue continues to be McCain-Feingold. But at least there is a silver lining there. By promising to nominate judges like Alito and Roberts, McCain will ensure that his namesake legislation would be overturned.

What, nothing about immigration, you ask? Hey I said this was from the libertarian perspective and libertarians are all over the map on that one. (Witness Ron Paul, who is very tough on border control, while others would allow pretty broad legal immigration.) But for the record, and for you conservatives, here is what he said:

"On the issue of illegal immigration, a position which provoked the outspoken opposition of many conservatives, I stood my ground aware that my position would imperil my campaign. I respect your opposition for I know that the vast majority of critics to the bill based their opposition in a principled defense of the rule of law. And while I and other Republican supporters of the bill were genuine in our intention to restore control of our borders, we failed, for various and understandable reasons, to convince Americans that we were. I accept that, and have pledged that it would be among my highest priorities to secure our borders first, and only after we achieved widespread consensus that our borders are secure, would we address other aspects of the problem in a wa y that defends the rule of law and does not encourage another wave of illegal immigration."

Bottom line, while there are some issues to cause wariness, this libertarian Republican thinks that John McCain would be a much better President than the alternatives.

And I'm a horrible leader.

Foxfier,
Thanks for the visit to BwD. As I was opining to Mrs. Daddy this morning, neither Clinton nor Obama have any sense that government's purpose is to protect us. They have no sense of limits too what government can and should do and that scares me.

Off topic - You (or Dean) have been tagged!

B-Daddy, Thanks for excerpting some of those quotes from the speech. Indeed, that was the sort of "straight talk" I and the rest of the assembled "zealots" at CPAC have been waiting to hear.

I still need time to process the words with past deeds that run contrary to the words but at least I feel the man and I are singing from the same hymnal.