Constitutional republics are, like, hard: the O > W edition 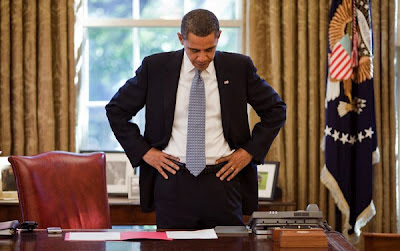 This is a re-post of a running series/theme we started around two years ago and which seems quite timely given the date on the calendar. Please feel free to share with your Bush-hating and/or undecided friends.

You've waited six long months for it, but we've finally got around to our running post that either makes Bush-hating liberals squirm or perhaps develop a severe case of amnesia regarding what they were saying about the man from about 2003 to the very early part of 2009.

First, however, a totally related Fast and Furious update:

Prior to the miserable hack that runs the Justice Department getting a Congressional Oversight committee contempt charge leveled at him (House floor vote coming next week) for stonewalling on the upper reaches of the Justice Department's knowledge and involvement in Fast and Furious, the federal government's (contrary to what the article below says) highly successful gun-running scheme, he was granted Executive Privilege from his BFF, the President (perhaps a little pay-back for the home-work assignment Holder was tasked after the President said it would be unprecedented for the Supreme Court to strike down a law that was on the books).


From the NY Times (whose article at the link may constitute more column-inches on F&F than all other articles they published on the same subject combined):


Republicans on the House oversight committee voted on Wednesday to recommend holding Attorney General Eric H. Holder Jr. in contempt of Congress in a dispute over internal Justice Department documents related to the botched gun trafficking operation known as “Fast and Furious.”

The 23-to-17 vote, which fell along party lines, came after President Obama invoked executive privilege to withhold the documents and communications among Justice Department officials last year as they grappled with the Congressional investigation into the case. As part of the operation, weapons bought in the United States were allowed to reach a Mexican drug cartel in an effort to build a bigger case.

It was the first time that Mr. Obama had asserted the privilege since taking office, and it sharpened the long-festering dispute between Mr. Holder and Representative Darrell Issa, Republican of California, the chairman of the House Committee on Oversight and Government Reform. Democrats called for the panel to hold off voting on the contempt citation during an often acrimonious partisan debate, but Republicans pressed forward with it.

Now take a wild guess who wasn't too keen on Executive Privlege just a short 5 years ago? If you guessed the back-bench senator from the Land of Lincoln, take a seat at the head of the class.

You may have thought that the perfectly legal firing of political appointees to be somewhat unseemly but it's not even in the same ballpark when it comes to 2 dead federal agents, hundreds of dead Mexican officials and innocent civilians and scads of guns that are still un-accounted for.

Exit question before the roll call: If, as Holder has asserted, the President had no knowledge of Fast and Furious, how then does Executive Privilege apply?

And now, the O > W electric boogaloo (newbies set off by asteriks):


Signing legislation that would allow the military to indefinitely detain terror suspects, including American citizens arrested in the United States, without charge. Got 4th amendment? Not anymore, you don't.

*Forcing Catholic institutions to violate their faith conscience by not only mandating them to provide coverage for contraceptives but making it completely free of charge as well.*

*End-running Congress in order to make (totally not) in-recess appointments to the National Labor Review Board.*

*End-running Congress to install immigration policy that countermands the laws that are on the books after claiming just a few months ago that he could not do so because, correctly, that's not how our system works.*

Our system of checks and balances and separation of powers was set up this way to prevent acts of tyranny, a lesson this part-time Constitutional law lecturer didn't forget - he just never believed it in the first place.

Please let us know if there is anything about the above that does not make him absolutely power-mad and Bush a complete rank amateur in that department by comparison.

Share it. Share it, brothers and sisters with friends, family and particularly all those alleged Bush-hating Obama supporters to see who it is are the hypocrites in your life. Maybe they aren't hypocrites, however. Maybe they were just jealous that all that Costitution-shredding and amassing of executive power wasn't being done by their guy. Well, they're getting back in spades, now.

He definitely looks like a guy trying to hold wet spaghetti together without a plate.