So, what can we learn from that little island country in the Mediterranean? 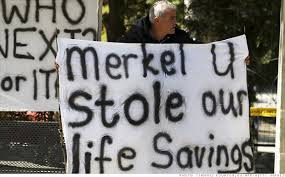 
For the good people of the island of Cypress, though, those days are long gone, baby, long gone.

The small country of Cyprus is giving the world a grave reality check today by reminding everyone that government money is simply the people's money redistributed as the European Union prepares to seize private bank account savings in order to bailout years of bad economic decisions.

The surprise decision by euro zone leaders to part-fund a bailout of Cyprus by taxing bank deposits sent shockwaves through financial markets on Monday, with shares and the bonds of struggling euro zone governments tumbling.

The bloc struck a deal on Saturday to hand Cyprus rescue loans worth 10 billion euros ($13 billion), but defied warnings - including from the European Central Bank - and imposed a levy that would see those with cash in the island's banks lose between 6.75 and 9.9 percent of their money.

The initial response of investors was unambiguous. Shares lurched lower, the euro fell to a new three-month low, while safe-haven assets such as gold and German government bonds jumped.

The cost of insuring the debt of even high-quality European banks against default also rose sharply with analysts citing fears the decision could spark contagion across peripheral regions with the potential for widespread outflows of deposits.

"If I were a saver, certainly in Spain or maybe Italy, I think I'd be looking askance at these measures and think this could yet happen to me," Peter Dixon, global financial economist at Commerzbank said.

France? Spain? Sure but what about here? No way, right?

3 years ago, we blogged precisely about that possibility and just how serious the law-makers up on Capitol Hill were taking the idea of raiding your 401(k).

From January of 2010 (please go to the link for the links contained in the original post for they are plentiful. Thanks):


Way, way back in ’08, KT turned us on to Argentina’s President, Cristina Fernandez de Kirchner’s government seizing the nation’s private pension system under the guise of “shielding” it from the global economic downturn when in reality it was really just cash-grab to pay off debt… something we know nothing about here.

Back in 2008, we blogged about Congressional hearings whose aim was the feasibility of eliminating the pre-tax exemption of your 401(k) contribution which amounts to $80billion annually not in the government coffers. The amount of your individual tax break would be directed to a new system of guranteed retirment accounts to which all workers would be obliged to contribute.

We always love it when the government starts using authoritarian code-speak like, “obliged”.

But don’t worry, Teresa Ghilarducci of the New School for Social Research (that title alone has train wreck written all over it) has got a plan. In return for wacking our 401(k) tax deferment, we would receive a $600 annual inflation-adjusted subsidy (read: a, hey, no hard feelings, bub “government kickback”) in return for being “obliged” to “invest” 5 percent of our pay into a guaranteed retirement account administered by the Social Security Admin which would pay a whopping 3% a year, adjusted for inflation.

And here’s Ms. Ghilarducci, herself:

“I want to stop the federal subsidy of 401(k)s,” Ghilarducci said in an interview. “401(k)s can continue to exist, but they won’t have the benefit of the subsidy of the tax break.”

Under the current 401(k) system, investors are charged relatively high retail fees, Ghilarducci said. (ed.: what this statement has to do with anything relative to what she is proposing is lost on us)

“I want to spend our nation’s dollar for retirement security better. Everybody would now be covered” if the plan were adopted, Ghilarducci said.
She has been in contact with Miller and McDermott about her plan, and they are interested in pursuing it, she said.

We thought this was all just a bad dream and that people and ideas like that represented by Ghilarducci would go away once we got the new presidency cranked up and we would be worried about healthcare, cap and trade, the economy, etc.

But proving that you just can’t sleep on these guys…

The U.S. Treasury and Labor Departments will ask for public comment as soon as next week on ways to promote the conversion of 401(k) savings and Individual Retirement Accounts into annuities or other steady payment streams, according to Assistant Labor Secretary Phyllis C. Borzi and Deputy Assistant Treasury Secretary Mark Iwry, who are spearheading the effort.

The article goes on to state the obvious:

Seven in 10 U.S. households object to the idea of the government requiring retirees to convert part of their savings into annuities guaranteeing a steady payment for life, according to an institute-funded report today.


Translation: No one. Repeat, no one likes this idea. That other 30% represent people who either do not have a 401(k) and/or are at an icome level by which they are not paying taxes of any kind so of course, they would think the further subsidization of their existence by the rest of us is a grand idea.

W.C. gives us a hint as to who is some of the politcal muscle behind this. Here is the webpage of a front group called RetirementUSA that is convened by the usual suspects among them the AFL-CIO and the purple people-beaters of the SEIU.


Retirement USA is a national initiative that is working for a new retirement system that, along with Social Security, will provide universal, secure, and adequate income for future retirees. The initiative has developed 12 Principles for a New Retirement System, which provide a framework for a future system in which employers, workers, and the government would share responsibility for the retirement security for all American workers.


That 12 principles for a New Retirement System is a cross between a description of the current Social Security set-up and a Leftist retirement Bill of Rights.

Well, since we already have Social Security then why do we need another nearly identical program?

Everyone knows that Social Security is insolvent. Everyone. So what the establishment of Social Security the Sequel and what this all represents is a Trojan Horse for the nationalization of your 401(k) and that, our friends, you can take to the bank.

With Social Security broke and our debt climbing out of control, the trillions and trillions of dollars setting in this country’s private pension accounts remain one of the last untapped sources of revenue for the government.


Back to the future:

Exit question: Is your money really yours?

Think about it for a moment: If you live in a country that has a massively generous social safety net and you live in a country with an electorate that constantly gives the government more and more power to bequeath “rights” out of thin air upon its citizens effectively stripping the sovereignty from the individual, what is “your money” but the tool by which the government will perform all that you have asked it to perform?

It seems to us, then, that the degree by which your money is truly yours is directly proportional to the sovereignty you possess and the freedoms and liberties you pursue not under the purview of the government.

Ugh. One can live his life responsibly, and yet get punished at each step. At what point does he give up? I understand, of course, that is the goal.

and if you don't like it... meet the XM25 airburst crowd control man-portable replacement for the mortar. http://blog.doodooecon.com/2013/03/introducing-airburst-crowd-control.html

Anything with a name like "12 Principles for a New Retirement System" is going to be bad.

That is a good tip especially to those new to the blogosphere.
Brief but very precise information… Many thanks for sharing
this one. A must read article!

I've just downloaded iStripper, so I can have the sexiest virtual strippers on my taskbar.

I want to to thank you for this wonderful read!! I certainly loved every little bit of it. I've got you book marked to check out new stuff you post…สล็อตออนไลน์