What we've been Tweeting


Mon Dieu, the man has been saying the same thing for the last four years.


Over 4 years ago, as President Obama took office and the country was in the depths of recession with unemployment at 7.8%, the President and Congressional Democrats pushed an $800 billion "stimulus" package with the promise that its passage would prevent the unemployment rate from rising above 8.1%.

Lots of talk of "jump starting the economy" at first and then it was long-term "investments in infrastructure" via builing and improvements in roads and bridges.... always the bridges. The scattershot sales pitch of how exactly this stimulus package was to be implemented and the evident way that the money was most likely going to be spent on the politically connected and favored constituents and voting blocs, earned the legislation the moniker Porkulus.


The President, having control of both houses of Congress, signed Porkulus into law after it sailed through the sausage-making process and we all saw how that worked out: 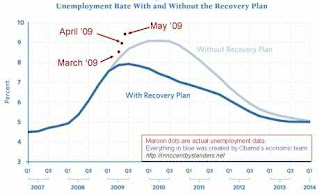 After peaking at 10.1%, the unemployment rate is finally back down below 8% more as a result of people falling out of the labor pool of people looking for work and thus not being counted towards the unemployment rate, a statistical phenomena that is bolstered by a decades-low labor particiapation rate. Combine this with a record number of Americans on food stamps and it helps explain why the President, for four years now, has been in a constant state of "pivoting to jobs creation".

Being a strict adherent of top-down, statist, Keynesian economics, he will not deviate from the dead-end path and as a result, he was at it again in Miami, yesterday:


Standing in front of a giant cargo crane at the port of Miami Friday, President Obama promoted his plan to encourage private sector investment in infrastructure to increase job creation in the United States.

“There are few more important things we can do to create jobs right now and strengthen our economy over the long haul than rebuilding the infrastructure that powers our businesses and our economy — our roads, our bridges, our schools and our ports like this one,” President Obama said.

“There’s work to be done,” Obama added. “There are workers who are ready to do it. Let’s prove to the world there is no better place to do business than right here in the United States of America, and let’s get started rebuilding America.”

The president outlined his infrastructure spending plan, called the “Rebuild America Partnership,” which consists of three components – the creation of a $10 billion national infrastructure bank, the establishment of new “America Fast Forward Bonds” for infrastructure investment, and the expansion of funding for the TIGER and TIFFIA infrastructure programs.

As he pushed for creating more jobs through infrastructure investment in America, the president stood in front of a crane manufactured by a Chinese company called ZPMC.


As evidence of "stimulus fatigue", that zinger in the last paragraph from ABC News would never have appeared in print as recently as a year ago.


So, a question to all you private investors out there: Given the track record of the economic illiterates in and associated with this administration, is there any way in hell you would invest in any of their infrastructure projects?

Well, this question may be moot, as has been ably demonstrated by the cronyistic Department of Energy loan program, those who are not well-connected need not apply. You fly-over bumpkins just saved yourself some money that would've been covered by all of our taxes anyway.

What a wonderfully clear statement on the issue, great job!

I walked to lunch on Thursday, as the sun was shining and it was nearly 40. Felt really good. On the way, I saw a Subaru with a cracked bumper.

The bumper sticker was, of course, Obama.

Excellent read, I just passed this onto a colleague who was doing a little research on this topic. And he actually bought me lunch because I found it for him. So I should thank you for the free lunch I got.