Some thoughts on this... "shutdown" and... outhouses?

A good friend posted the following on FaceBook regarding the shutdown and its effect on our National Parks:

My hope is that all those who have professed love for the parks and monuments -- and outrage over their closing these past 16 days -- will think long and hard before voting for people that end up constantly slashing the NPS budget to the bone. My fear is that there was a lot of feigned outrage over them for political reasons, however. Too bad, because our parks are in dire need.


(M), I know this probably isn't the forum for it - we can discuss later - but my travels to our National Parks have not indicated any sort of underfunding. They are clean, well-maintained and properly staffed. This is just my anecdotal observations, your mileage may differ.

In addition, there's all sorts of things that are cattywampus out beyond the pavement in any given park -- from invasive species of plants endangering delicate ecosystems that need to be yanked, Burmese Pythons being loosed and reproducing by the thousands in the Everglades that are tearing through native fauna populations, to the cutting of ranger programs.

Old buildings needing to be replaced, maintained, updated. That's just starters. 90% of all pavement on park roads in the system are in fair to poor shape per NPS "Critical Maintenance Backlog", plus 28 publicly accessible bridges are structurally deficient. NPS fleet vehicles are older than dirt. 6,700 miles of trail out of 18,600 are in "poor" or "seriously deficient" condition. Not to mention things like cleaning up after the dipsh*ts and their J-Tree tag-athon.

There's a lot more to these places than the 2-5 days we customarily get can expose us to.

And where we responded in kind:


(M), show me a federal service, department or bureau that doesn't consider itself to be underfunded and I will show you the Easter bunny. It's simply in the nature of bureaucracy to always cry poor mouth. As an employee of the DOD/DON, I know this to be fact. So, with a finite "pie", it becomes a matter of priorities. Back in 09, a $800 billion stimulus package was made law. The big selling point of it was that it would be put to use on the very roads, trails and bridges of which you speak. If the tremendous backlog of work iis as dire as you claim, then the powers that be apparently did not deem it worthy of consideration. $800B is a lot of money, after all. So having said that, and respecting your devotion to our Parks, I will certainly heed your advise with respect to lever-pulling for folks who would treat so shabbily those same Parks.


Our point was demonstrated in a article we posted 3 years ago after we visited Canyonlands NP (Utah) for the first time. Here it is: 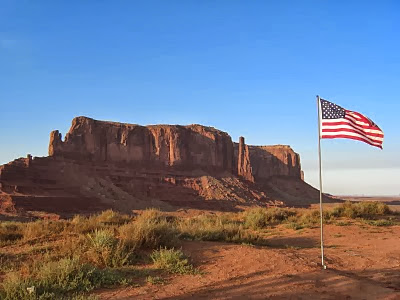 NOT SO RANDOM THOUGHT FROM THE ROAD

... and where we heap effusive praise upon the government... in a manner of speaking...

Heavy thunder showers across central and southern Utah and the four corners region, including a couple of tornado touchdowns in northern Arizona, is threatening our road trip but there is some collateral benefit to this inclement weather which we will share later.


One of the things promised by Porkulus was that they would spend between $2 and $4 billion on infrastructure upgrades in our National Park system of which we were assured was in dire need (this was in addition to radio spots begging for donations to the NPS for the same reason). Being frequent visitors to various sites of this nation's best idea, we were skeptical as the eye test simply did not warrant this outlay. Sure, an upgrade here and there, but upwards of $4 billion worth?

After giving it some thought, we felt that perhaps the easiest and most accurate way to assess the infrastructural health of an individual national park would be to grade what is probably the most representative feature of the efficiency and aesthetics of any publicly-held land and that would be... 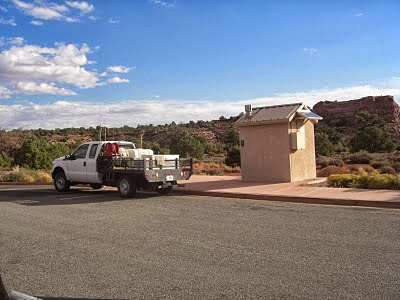 After a random sampling of 4 outhouses inside Canyonlands National Park, let's look at the scores.


Lighting: With plenty of windows for natural lighting, even with the stormy/overcast conditions: Good

And bonus points for each one being outfitted with an anti-bacterial (scented!) gel dispenser.

And let's all bear in mind that Canyonlands NP, located where it is in southeastern Utah is, by definition, remote.

In all seriousness, if the overall condition of the park infrastructure (visitor center, road conditions, camp site maintenance, condition of hiking trails, etc.) of Canyonlands NP is to be taken as an example, then our skepticism is only confirmed.

And if the National Park Service is truly operating under budget, then they should be held up as an example of a federal agency that is doing a masterful job with limited resources.

Overall, the Park Service does an outstanding job with balancing the desires of the public with respect to access on one hand and on the other, not turning our park system into a paved, four-lane, amusement park.

A Bravo-Zulu to the policy-makers and men and women in uniform of the U.S. National Park Service.

All during this alleged shutdown, the federal government was up on the throttle at 87% full power. The closing of memorials and National Parks and the cancelling of air shows was all bulls**t. Totally unnecessary. The administration was determined to exact as much pain out of that 13% as possible and to make life as miserable as possible for people like our friend and those of us who do indeed love our park system.