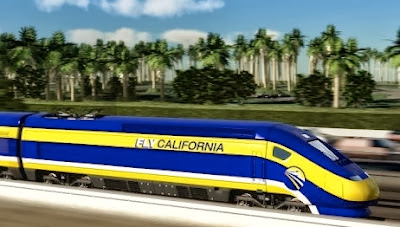 Out in the California's Central Valley where the first leg of California's high-speed rail system will be built, ground hasn't yet been broken but engineers be engineering and even this seemingly unobtrusive activity of civil engineers in shirt-sleaves and white hardhats walking around with clipboards is already grating on the locals.

Truth be told, you'd probably be pretty chapped also once you learned your business would be leveled or that you would be losing farmland as sacrifices to the public works gods of Sacramento and Washington D.C.

Five years ago, California voters overwhelmingly approved the idea of bringing a bullet train to themost populous U.S. state. It would be America's first high-speed rail system, sold to the public as a way to improve access to good-paying jobs, cut pollution from smog-filled roadways and reduce time wasted sitting in traffic while providing an alternative to high fuel prices.

Now, engineering work has finally begun on the first 30-mile (48-kilometer) segment of track here in Fresno, a city of a half-million people with soaring unemployment and a withering downtown core littered with abandoned factories and shuttered stores.

Rail is meant to help Fresno, with construction jobs now and improved access to economic opportunity once the project is finished. But the region that could benefit most from the project is also where opposition to it has grown most fierce.

Such sentiments can be heard throughout the Central Valley, where roads are dotted with signs such as: "HERE COMES HIGH SPEED RAIL There goes the farm." Growers complain of misplaced priorities, and residents wonder if their tax money is being squandered.

Aaron Fukuda, a civil engineer whose house in the dairy town of Hanford lies directly in one of the possible train routes, says: "People are worn out, tired, frustrated."

The article goes on to make a false comparison between the bullet train's advertised 2 hr. and 40 minute travel time from L.A. to San Francisco and the 6 hours that it would take to do it by car. For years, we have been saying that California already has form of "high-speed rail" and it's called commuter flights which will do the L.A.-SanFran trip in about 45 minutes.


Political and financial compromises led officials to scale back plans that now mean trains will be forced to slow down and share tracks in major cities, leading critics to question whether it will truly be the 220-mph (355-kph) "high-speed rail" voters were promised.

If by "compromise" they mean they compromised the original content of the project, then yes, they compromised the hell out of it. With cost estimates coming as high as $120 billion, Governor Moonbeam's boys took hatchets to the project to get it to the more palatable $68 billion (original estimates when this turkey was put on the ballot back in 2008 was in the $32-40 billion range). Of course, that $68 B gets you only the tracks. No powering infrastructure. No gates. No actual choo-choos.


And it is imperative that they blow through $2.2 billion by 2015 or they lose out on $3.2 billion of federal money. We think they've got it in them. It's the government we're talking about after all.

And as we referenced earlier there is a very human emotional toll that high-speed choo-choos is exacting that sounds like very much like the L.A.'s Metropolitan Water District Owen's Valley land grab nearly 100 years ago:

n the Central Valley, there is intense distrust of the authority, which has started buying up property, land and businesses, some of which have been in families for generations.

At the dimly lit Cosmopolitan Cafe, office workers line up alongside farmers and paramedics to order sandwiches as waitresses expeditiously call out order numbers. Four decades' worth of memorabilia and yellowing newspaper restaurant reviews line the faux-wood walls in the space that Lanfranco has owned for most of his life.

Lanfranco says the sum he was offered to buy the property does not come close to replacing the space he owns, debt-free. The adjacent parking lot — a rare commodity — is packed with pickup trucks and cars each day at lunchtime. Lanfranco declined to say how much he was offered, and the offers are not public record.

"It's not like it's just a restaurant that I've owned for a couple of years and now I can just go replace it. It's something that I've put the last 45 years of my life into," the 66-year-old says.

His is just one of hundreds of properties the state needs to buy for the rail project or seize through eminent domain if they cannot reach a deal. Many owners are resentful after years of what they say have been confusing messages and misleading information.


All this to secure the legacy of an old washed-up governor. Heckuva job, California!

They're saving the Earth. How heroic.