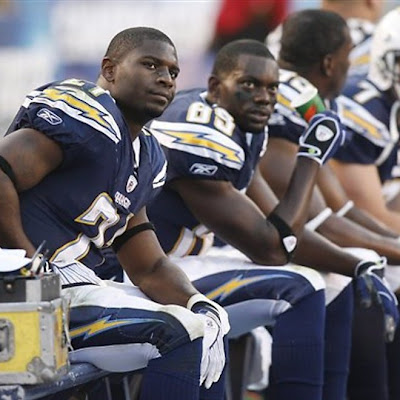 Charger G.M., A.J. Smith has stated in public that head coach Norv Turner will be returning next season. We’re not sure how anyone can look at this 4-8 season thus far and the effort the Chargers gave in their 22-16 defeat at the hands of the Atlanta Falcons and make that an ironclad guarantee especially considering that the score is no indication of how soundly and thoroughly the Chargers were beat.

The Falcons because of some boneheaded miscues of their own probably left 10 points out on the field and if not for some turnovers created by the Charger D, including a fumble return for a touchdown by Eric Weddle, this one could’ve been a blowout.

The big, fast, aggressive team that we’ve seen the past 2-3 years has been replaced by one that is completely passive and reactive in nature.

We’ve never met Norv Turner but if that old adage of teams adopting the personality and nature of their head ball coach is true then were pretty darn sure Turner is an uninspiring, retiring, bland and completely predictable individual because that is exactly how the Chargers played yesterday.

Well, almost predictable. At one point in the first half, LT was on the sidelines and Norv dialed-up a very nicely conceived and executed screen pass for… backup HB/FB Jacob Hester(?) LT promptly returned to the field of play for the next play only to be ran between the tackles. Got us there, Norv. Sending in Hester for a play call we’ve been dying to see more of with LT caught us completely off guard.

We saw some fight and some scrap left in this team as evidenced by that goal line stand at the end of the 1st half (which was the first time in 6 consecutive situations where the defense did not give up a score to the opposing team’s offense at the end of a half) but it appeared to be that of the last dying gasp nature rather than that of a team that is prepared to turn the corner and make real strides towards improvement.

The offensive line was terrible, the linebacking corp MIA and for the life of us, we cannot understand why the Charger defensive coordinator, whomever he may be, insists on playing zone in the defensive secondary when the personnel has never shown, through the years, any propensity towards being able to pick it up and… QB Philip Rivers is still yelling over to the sidelines to get the play in on time before the play clock expires.

We were 50/50 on the firing of Marty two seasons ago but we were 100% confident that the Turner hiring decision was a horrible one. The justification of “continuity” rang hollow and appeared to be cover for the Charger brass waiting so long after the season ended to sack Marty and being stuck with the leftovers as we were supposed to be more acceptant of the Turner hire because he installed the offense as offensive coordinator back in ’01 that the Chargers had been running to that point.

So, now what? As much of a tremendous talent evaluator that we believe Smith is, this mess is his doing and because of his massive ego, axing his guy Turner probably won’t happen. So we’re stuck with a lame duck head coach – not a lame duck in the eyes of the GM but in the eyes of the players who don’t respond to his style or personality and who will now be playing out the string until they or their coach is kicked out of town. Good times.

Give us a carte blanche on a new stadium, and we'll compete.

Whst's wrong with the Chargers? From today's San Diego Union-Tribune:
Tomlinson [snip] has been saying for some time, he believes the Chargers have lost their identity over the past two years and have yet to find a substantial new one.

Let's see... What happened two years ago? What could that have been that LT's talking about?

On the upside, there is really no place for the Chargers to go. Anschutz (sp?) is going to want a piece of the team if they relocate to his site up in L.A. which is a non-starter for the Spanos family.

On the downside, there is really no place for the Chargers to go.

Ha! I'm glad the Pads got their stadium, too, because I like baseball -- I even voted for the thing because I thought this town could use one.

But they sold the idea to their tightfisted fans on the basis of "We'll be able to be competitive in going after the big talent" -- and that's proving to be a bunch of hooey. Poor people got duped. But it means I get great seats in a really pretty ballpark whenever the Dodgers come to town to play!

- Always With the Alterior Motive Mongo

I think the ballpark is an unmitigated disaster. Not just the funding of it but the place itself... wrong location, no tailgating, questionable architectual aesthetics, the charming condo canyon that has sprung-up around it (owned by John Moores, of course), etc.,etc.