So when Bush leaves office, will it be possible to blame everything on the BCS? 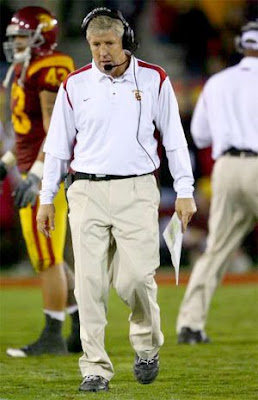 Against all our desires and wishes, the BCS might just work out this year. Here’s this week’s rankings:


We have no complaints with one of the contestants being the winner of the Alabama-Florida game in the SEC championship and the other being Oklahoma... if they beat Missouri in the Big 12 championship game or... Texas (or USC ?) if they don’t.

And if you’re putting up the tree and dreading who it is you have to shop for as “Secret Santa” then its time to start the annual pondering of whether or not Pete Carroll is going to stay at SC or return to the meat grinder that is the NFL. Pete says he’s staying but also says he is getting tired of the same old – same old with respect to the BCS as his one-loss Trojan team will be getting shut out of the BCS title game at the hands of at least one other one-loss team and two if Florida beats Alabama. Hey, Pete, we feel for you, man, but if you take care of business in-conference against teams you know you should beat then the BCS, for all its flaws, will take care of you.

In this year’s renewal of the City championship, USC and UCLA are going to revive a tradition that has been dormant since 1982: both teams will wear their home jerseys which means USC as the visiting team at the Rose Bowl will be penalized a timeout at the beginning of the game for donning their cardinal tops opposite the Bruins in the powder blue. In a slight twist, Rick Neuheisel, the Bruin head coach has agreed to take a timeout immediately after USC is assessed their penalty timeout in a sportman-like show of competitive goodwill. We’re laying 12-1 odds that Slick Rick reneges on his agreement and doesn’t call that timeout… and who's not rooting for that to happen?

We like the idea that the fellas at AOL Fanhouse have for the renaming of the Heisman Trophy. Call it the “Weis” whereby the hardware is crane-lifted to “the player who's on television and talked about the most without great attention to his actual level of ability.” We’re not sure when the trend of picking the quarterback or running back of a top 5 team began but it did appear to kick into high gear back in ’92 and we’re still waiting for Gino Torretta to give Marshall back his Heisman.

And speaking of big Charlie, the Notre Dame brass decided that his 6-6 record and four-year 28-21 record (19 of those which were amassed in his first two years with his predecessor’s players) was good enough for the most storied collegiate football program in America and will be retaining his services. Said predecessor, Ty Willingham was axed after his third year and a 6-5 record and Coaches Hot Seat is suggesting that there are some double-standards at work here and we won’t argue with them. Hey, it’s Notre Dame and piling-on gives us such unbridled joy.

And finally...We always hear how wonderful football is in the South and how passionate the fans are and how committed the universities are to the success of their respective football teams. Yeah, we get it. Those people are also completely unreasonable. Witness the firing of Auburn’s Tommy Tuberville and his 85-40 record in ten years on the Plains, yesterday. What’s that…? He resigned? Oh… well, you people down there are still insane and a tad creepy.