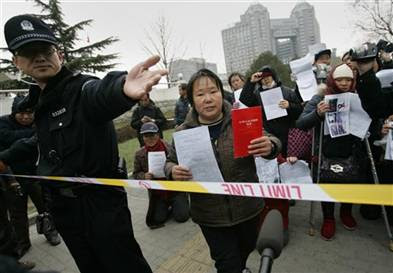 On U.N. International Human Rights day, we are reminded that, by golly, there are actual human rights protests going on.

"Two dozen people protested outside China's Foreign Ministry in downtown Beijing
on Wednesday, using the 60th anniversary of the U.N.'s Universal Declaration of
Human Rights to decry a myriad of alleged government abuses

One
woman clasped a bright red copy of the constitution close to her chest, and
another a white banner in English that read: "Safeguard human rights." Others
held photos of relatives allegedly beaten in labor camps."

Clever marketing with the constitution and the English language and all but points deducted for the omission of Mexican flags.

"Beijing police contained the protesters behind a police rope, but let them
continue for nearly half an hour, before they were herded onto a public city bus
and taken away, pressing their complaints to the windows and shouting at foreign
journalists.
"They are going to relevant departments," said one policeman,
who refused to give his name."

And just what is it with authoritarian/totalitarian regimes that make high art of euphemisms?

Happy U.N. Human Rights Day to everyone and to where we should take a moment to reflect upon the freedoms and liberties we enjoy and those throughout the world that are denied the same because of opressive governments guided by corrupt ideologies.