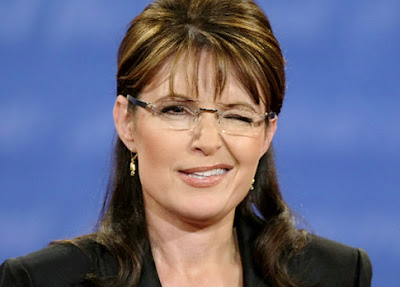 One in a series that takes a look at some of the zany, wacky and madcap things said by the former governor of Alaska.

Here's Palin chiming in on the contraception mandate:


At a press conference on Capitol Hill, (Palin) explained her support for the Obama administration’s decision to require religious institutions to offer health insurance plans that cover contraception.

“I know that the records show that 90 percent of Catholic women of childbearing age use birth control,” (Palin) said to reporters on Thursday. ”So this is a women’s health issue.”

“It’s a matter of conscience for each woman, her doctor, her husband, her family, and her God to make their own decisions. And as a Catholic, I support the right of a woman to make that decision.”

Good lord, that is just preposterous and yep, you know the drill, that wasn't Palin at all rather Sarah sez regular and overall series leader, House minority leader, Nancy Pelosi.

This is what now passes for logic with the statist-left.

And how did we get to this point? Peter Schweizer thinks he knows (H/T: Hot Air):


Forget for a minute the religious question and look at who wins big here: Big Pharma. This mandate is not really about condoms or generic versions of “the pill,” which are available free or cheap in lots of places. This is about brand-name birth control drugs and other devices that some consumers swear off because they are too expensive. The Health and Human Services (HHS) mandate requires health-insurance companies provide contraceptive coverage for all “FDA approved contraceptive methods.” It does not insist on generics. And it does not offer any cost containment.

What’s more, the mandate prevents health-insurance companies from having copays or deductibles for the benefit. This is the perfect set up for Big Pharma. Since the drugs will be paid for by a third party (insurance companies, who will pass the cost on to employers and the rest of us), the consumer won’t worry about the price. Expensive brand names will no doubt see demand rise. Ask more health-care analysts why the cost of medical services continues to rise so rapidly and near the top of the list is the fact that a third-party payment system won’t contain costs.

And this represents perfectly why there will be no cost containment provided by ObamaCare: lack of cost transparency. If the consumer isn't directly paying for the product, does he or she care how much it costs and thus impose any sort of self-rationing (i.e. paying for only what you need)? Of course, not.

During the crafting of ObamaCare we learned the phrase "If you are not at the table then you are on the menu." It certainly would appear that Big Pharma's support of ObamaCare after a brief initial pushback was assisted greatly with this sweetheart carve-out at the proverbial table.

Stat she's misquoting:
98% of women who aren't pregnant, weren't pregnant in the last something-months and are trying not to become pregnant yet have had sex have at least once in their lives used birth control-- including the rhythm method/NFP and coitus interruptus.

Yeah, access isn't really an issue it's true, but I keep getting that stat taken at face value. -.-

We only need a united nation.
We need to put an end to the traitors.
We need to strengthen the solidarity of the People,
in order to create a civilian army capable of confronting
all the forces of Christianity.

If you use birth control that's your choice but if you're Catholic you're a bad one.

That's the discussion that isn't being had. There is no such thing as a good Catholic or a bad Catholic... there's only following doctrine or not.

And even if 99% use birth control, the Pope runs the church so what he says is what the church believes.