A few words about the uh... estate tax 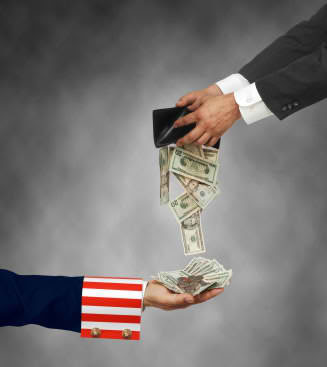 Let's just get this out of the way upfront: we find the estate tax or, more accurately, the death tax to be morally reprehensible. Despite moral high ground claims by its supporters that they are merely defending democracy by preventing generation-to-generation dynastic wealth or something, it's nothing more than a naked money grab on people's wealth that in many cases has been taxed once already.

And as we're set to go over the fiscal cliff and see the death tax rate increase (currently the death tax is 35% after a $5 million exemption. If no deal is reached between the President and the Republicans, the death tax will shoot up to 55% after only a $1 million exemption), we find that many people's fortune is not liquid or in stock portfolio's rather land and physical assets.


Rancher Kevin Kester works dawn to dusk, drives a 12-year-old pick-up truck and earns less than a typical bureaucrat in Washington D.C., yet the federal government considers him rich enough to pay the estate tax -- also known as the "death tax."

And with that tax set to soar at the beginning of 2013 without some kind of intervention from Congress, farmers and ranchers like Kester are waiting anxiously.

"There is no way financially my kids can pay what the IRS is going to demand from them nine months after death and keep this ranch intact for their generation and future generations," said Kester, of the Bear Valley Ranch in Central California.

Two decades ago, Kester paid the IRS $2 million when he inherited a 22,000-acre cattle ranch from his grandfather. Come January, the tax burden on his children will be more than $13 million.

For supporters of a high estate tax, which is imposed on somebody's estate after death, Kester is the kind of person they rarely mention. He doesn't own a mansion. He's not the CEO of a multi-national. But because of his line of work, he owns a lot of property that would be subject to a lot of tax.

"Our number one goal is to repeal the estate tax, to get rid of it, not have it for every generation, when I die and my kids die and so on," he told Fox News. "For everyone to have to re-purchase the ranch or farm over and over for each generation, that's inherently unjust. So what we're doing is asking our politicians to understand that and repeal the estate tax."

That, however, is unlikely. Currently, the federal government taxes estates worth $5 million dollars and up at 35 percent. When the Bush-era tax rates expire in January, rates increase to 55 percent on estates of $1 million or more. While some Republicans want to eliminate the death tax entirely, President Obama has proposed a 45 percent rate on estates of $3.5 million and up.

"The idea behind the estate tax is to prevent the very wealthy among us from accumulating vast fortunes that they can pass along to the next generation," said Patrick Lester, director of Federal Fiscal Policy with the progressive think tank -- OMB Watch. "The poster child for the estate tax is Paris Hilton -- the celebrity and hotel heiress. That's who this is targeted at, not ordinary Americans."

And guess what? The death tax does target and does effect ordinary Americans. Not only Kevin Kester but perhaps someone or some family you know.

We are close to family that is dealing with this as we speak as "Isaac" and "Jane" are advanced in years, in failing health and may not be around for too much longer.

This family is not super-rich by any stretch of the imagination but back in the 60s and 70s while still in the Navy, Isaac made some shrewd real estate investments/purchases which afforded his family a comfortable middle-class lifestyle and which afforded his children a good education.

Now, why should this family even have to worry about shedding some/most/all of their assets that could otherwise be used to fund the education of the grandchildren? Why should Isaac be forced to make a decision on the modest beachfront house in San Diego he purchased decades ago on the relative cheap and which is now worth millions and now serves as the family's weekend/stay-cation retreat?

Much like Kevin Kester, the modest fortune that Isaac and Jane are sitting on is not made up of liquid assets whose alacrity is better suited to whatever good intentions supporter of the death tax believe it merits, rather in real estate holdings upon which whose assumed values the family will be stuck paying the usurious death tax.

Isaac and Jane and their family are being punished because Isaac and Jane were successful at investing. The federal government is punishing Isaac and Jane for being outstanding providers for their family. The death tax as it currently stands and more so if the rate goes up and the exemption level comes down is a disincentive to shrewd investing, innovation and hard work. And when the federal government thinks it can lay claim to what you built over the decades in order to set up your family, you have a situation that is perverse and, yes, morally reprehensible.

Anybdy who likes ConAgra and Archer-Daniels-Midland loves the Death Tax.