We saw this picture below posted by a friend on Facebook. 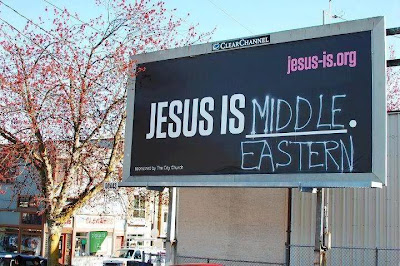 In a vacuum, we’re not sure what the point is. However, given that the picture was sponsored by what we’re sure is a truly worthwhile organization called Americans Against Republicans… we’re still not sure what the point is. Sure, given who the group is, it’s obviously an ad hominem attack on Republicans/conservatives but how? What point are they trying to make with respect to their disdain for all things Republican-y.

Wait a minute. We think we might know. An outfit like Americans Against Republicans, by the very nature of this sign, know two things about Republicans and conservatives: 1) They’re all Christian and 2) they all hate people from the Middle East.

Are we right? This would appear to be just Americans Against Republicans little way of reminding those of us over here on the right that it’s a tad of an inconsistency to love Jesus but hate others of his geographic origin. Did we nail that or what?

Yes, the liberal fantasy template of Islamophobia on the right. Of course, we have nothing against Muslims or the Islamic faith. We do question, however, that whole fly-planes-into-skyscrapers and genital mutilation thing that are held in high regard among many Muslims. Funny then, that the liberal-Left would cozy up to adherents of this faith in the perpetual existential Israel vs. the rest of the Middle East scrum. To our knowledge, the Jewish faith condones no such acts.

Well, the jesus-is.org doesn't seem to be anti-Republican and the Middle Eastern appears to be graffiti. What is your source on this being Americans against Republicans?

I don't know about you, but I'm still clinging to my irrational hatred of everyone who doesn't look like me. No billboard is going to change that!