What? Another gun-running operation 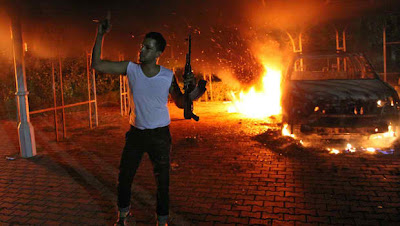 Alternate headline: Now we know perhaps why Benghazi and the resulting cover-up was such a fiasco


Setting aside the fact that this would have been useful information to the electorate a month ago, the nation’s paper of record is presenting evidence that anyone that could rub two brain cells together could’ve easily predicted.

From the New York Times:


The Obama administration secretly gave its blessing to arms shipments to Libyan rebels from Qatar last year, but American officials later grew alarmed as evidence grew that Qatar was turning some of the weapons over to Islamic militants, according to United States officials and foreign diplomats.

No evidence has emerged linking the weapons provided by the Qataris during the uprising against Col. Muammar el-Qaddafi to the attack that killed four Americans at the United States diplomatic compound in Benghazi, Libya, in September.

But in the months before, the Obama administration clearly was worried about the consequences of its hidden hand in helping arm Libyan militants, concerns that have not previously been reported. The weapons and money from Qatar strengthened militant groups in Libya, allowing them to become a destabilizing force since the fall of the Qaddafi government.

Essentially, we were running guns to Libyan rebels, and, as it turns out Islamic jihadists, out of our consulate in Benghazi, which at the east end of the country was much outside of Qaddafi's sphere of influence in Tripoli in the west. No wonder it’s been such a touchy subject, right?


More from the article:


The administration has never determined where all of the weapons, paid for by Qatar and the United Arab Emirates, went inside Libya, officials said. Qatar is believed to have shipped by air and sea small arms, including machine guns, automatic rifles, and ammunition, for which it has demanded reimbursement from Libya’s new government. Some of the arms since have been moved from Libya to militants with ties to Al Qaeda in Mali, where radical jihadi factions have imposed Shariah law in the northern part of the country, the former Defense Department official said. Others have gone to Syria, according to several American and foreign officials and arms traders.

This administration has established a consistent trend: a complete lack of accounting on where it is the weapons they are running end up whether it’s to the Middle East or to Mexico. Well, we don’t know where but we do know who: jihadists and drug cartels. Terrific.

And dig this Inside Baseball stuff:


The case of Marc Turi, the American arms merchant who had sought to provide weapons to Libya, demonstrates other challenges the United States faced in dealing with Libya. A dealer who lives in both Arizona and Abu Dhabi in the United Arab Emirates, Mr. Turi sells small arms to buyers in the Middle East and Africa, relying primarily on suppliers of Russian-designed weapons in Eastern Europe.

In March 2011, just as the Libyan civil war was intensifying, Mr. Turi realized that Libya could be a lucrative new market, and applied to the State Department for a license to provide weapons to the rebels there, according to e-mails and other documents he has provided. (American citizens are required to obtain United States approval for any international arms sales.)

He also e-mailed J. Christopher Stevens, then the special representative to the Libyan rebel alliance. The diplomat said he would “share” Mr. Turi’s proposal with colleagues in Washington, according to e-mails provided by Mr. Turi. Mr. Stevens, who became the United States ambassador to Libya, was one of the four Americans killed in the Benghazi attack on Sept. 11.

Mr. Turi’s application for a license was rejected in late March 2011. Undeterred, he applied again, this time stating only that he planned to ship arms worth more than $200 million to Qatar. In May 2011, his application was approved. Mr. Turi, in an interview, said that his intent was to get weapons to Qatar and that what “the U.S. government and Qatar allowed from there was between them.”

Two months later, though, his home near Phoenix was raided by agents from the Department of Homeland Security. Administration officials say he remains under investigation in connection with his arms dealings. The Justice Department would not comment.

Mr. Turi said he believed that United States officials had shut down his proposed arms pipeline because he was getting in the way of the Obama administration’s dealings with Qatar. The Qataris, he complained, imposed no controls on who got the weapons. “They just handed them out like candy,” he said.

Apply for and be granted a gun-running license by State one day and then get your house raided by Justice the next.

We suppose this is what Team O considers separation of powers or checks and balances when you start raising questions about the administration’s ill-begotten gun-running scheme.

Yep, boots on the ground is a real pain-in-the-ass, admittedly, and after 10 years of war, we suppose we're all kind of sick and tired of the Middle East. However, what reasonable expectation in leading from behind so as to not get dirt under our nation's fingernails is there to think that well-organized jihadist networks won't get their hands on these weapons if not over-run the entire operation altogether?

We will be living with these consequences for years to come. Hopefully.

they are our betters, and know how to properly control gun violence.

Valuable information. Lucky me I found your web site
by accident, and I'm shocked why this

There is a dilemma whereby I blame both the media and the dumbed-down society. Not only do we wish to have a Libertarian model of the free market press, but then we expect the press to present logically important news.

Justin Bieber, The Queen’s grand-baby, “name-your-celeb” are more entertaining and substitute them for a harsh story that may cover political candidates generally favored by a generation of media educated by a liberal academia. There is more money in Woody Haralson doing something outrageous. And sells more commercials.

The media is motivated by both our Libertarian principles and political bias, but they brew together to create a lethal virus to our freedom.

So, another gun-running scandal not covered by the press? Pissed, yah, surprised, no!

Keep up the good work, hopefully the MSM television news will go the way of the newspapers as readership turns to the internet for their news.