Graphic images of the day

If you have been a free-market conservative or libertarian for any length of time, you have probably at one point or another been confronted by a liberal friend and had the discussion on which is the more virtuous form of socio-economics: free markets or a collectivized marketplace. Your friend surely made the argument that collectivism is most assuredly the more virtuous or moral system as one of the things it accomplishes is that it prevents the strong/rich from taking advantage of the weak/poor.

Never mind that history is replete with example after example of collectivist societies, and more specifically, the governments of those collectivist societies eating their own, so to speak, by the millions… presumably with the justification they were making sure those little people would never be taken advantage of by rapacious capitalists now that they were dead.

Anyway, for your part, how do your explain individualism and rational self-interest as virtuous? It’s a laughable notion to your liberal friend. After all, self-interest is synonymous with selfishness to your friend, right? So, how do you put into words that which you know in your heart is correct? How do you explain the concepts of your political/economic world view as the truly virtuous form of governance to your liberal friend?

Well, ladies and gentlemen, our friend and fellow SLOB, Sir Charles of Doo Doo Economics is here to help.


But first a quick primer with the two graphic images below that help explain what Sir Charles will be explaining. 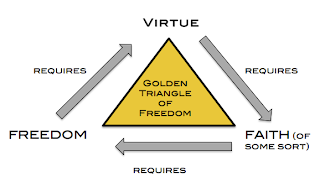 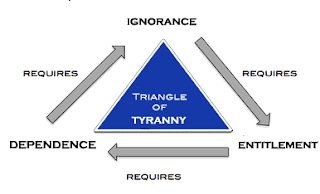 
Don’t worry, the graphics are at the Doo Doo blog post, which can be linked to here, as well.

Thanks for the link! I hope a few people can use the work to promote freedom!