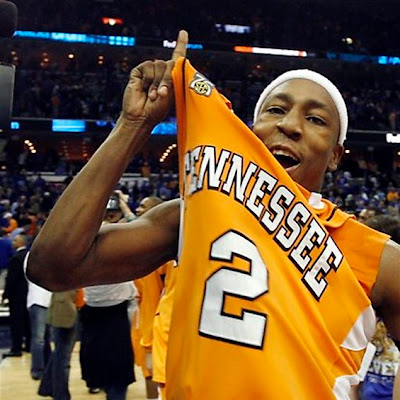 To quote Chick Hearn, “It wasn’t an oil painting” but it was a highly entertaining in-season out-of-conference affair nonetheless. #2 Tennessee knocked off #1 Memphis last night in Memphis, 66-62 and ended the Tigers bid for an undefeated season and exposed what many think is the Tigers’ achille’s heel: free throw shooting. Tigers went only 8-17 from the charity stripe. Story here from SI.com

Forgot who it was but one of the ESPN commentators claimed the match-up had a Final Four feel to it. Uhhhh… not really. You see, unlike the Final Four which has gone Super Bowl with respect to its highly sterile, Domed-stadium, corporate feel, this game had an electric atmosphere with vocal partisan fans and maximum effort and energy displayed by the players.

All that and the fact that we don’t think either of these teams will make it to the Final Four. As for Memphis, you can’t hover around 50% from the line and expect to make it far in the octagon that is the NCAA tournament and both Memphis and Tennessee both rely a bit too much on the the 3-ball for our liking. A fickle thing, the trifecta is when the screws are tightened-down in single-elimination ball in March. 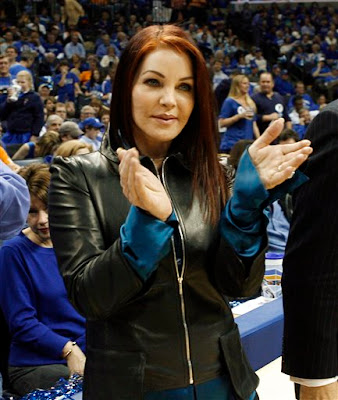 By the way, Priscilla Presley was in attendance last night supporting the Tigers. So was Peyton Manning (not pictured), representing for Rocky Top. Did she ever remarry? Replacing America’s first Protestant saint would be a tall order, indeed.

Oh, Priscilla, what have you done with your face?

BwD... Feeding into the east coast bias and Hype Machine. For shame!

There was a perfectly great college basketball game just down the street from you that same evening!!