Some not so random thoughts for the day 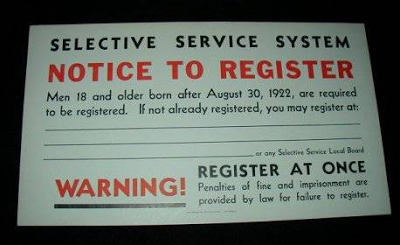 We were going back in our email archives looking for a particular transmission when we ran across the following. It was in response to a loved one who thought we should bring back the draft. Oddly enough and completely anecdotally, we’ve found the strongest support for bringing back the draft to be among those that were subjected to it and/or served in this nation’s military.

Here’s our view of things 6 years ago in our pre-blogging days which still hold true and which we also invite you to share your thoughts on the matter in the comment section:


Draft? Bad idea. I don't want to be in a foxhole with someone who doesn't want to be there. What? 18 yr. old kids don't know what they want to do with their lives? What's new? This hasn't changed since Moses was a mess cook. Also, this takes an arrow out of the quiver of the anti-war set. The bitch about Vietnam was that it was taking 18 yr. old kids right out of their homes and throwing them into the jungle without them ever asking to be. In a modern society, that point has some legitimacy.

Today's all-volunteer armed forces are populated by people that are fully cognizant they may be asked to fight in a war that they may not necessarily believe in. They know this the moment they sign up. This eliminates any sort of "moral dilemma" that should otherwise not be part of the equation in determining whether or not we are going overseas to kick someone's ass.

Also, you will run into the same problems where the poor kids both black, white and Hispanic will be disproportionately represented while the rich and middle-class kids will be commuted because they are at college. Whether this indeed will be the case, the draft will be generalized as such and that is not the image our nation's military should have.

Finally, the most effective military fighting force this planet has ever seen resides in our country's armed forces which is fully voluntary. The correlation between those two facts is not coincidental. We have a motivated and dedicated group of people in our military that all, generally speaking, want to be there - why mess with what truly works. It appears that re-introducing the draft is a solution in search of a problem.


Again, your thoughts on the matter are appreciated. Thanks.

Slavery for global military empire and occupation of foreign nations is doubly wrong.

Right now, a universal draft would be, practically, throwing half of all the 18 year olds in the country into prison. Universal conscription sounds like an idea floated by the Prison Guard Union.

Most (all?) states have requirements for state history, American history, and civics, for kids to graduate from high school. Those classes have been infiltrated, and range from useless and anti-American.

I'd like to see honest, useful classes. A high school graduate should at least have gone through NRA's Eddie Eagle program, and know what to do when they see a loaded gun. Better still, if they know how to make a gun safe. Actual handling of firearms should be a requirement for a diploma.

At least half of basic training should be built into the high school curriculum. Kids should be given 4 years notice that they need to pass the Army's PT requirements: 22 push ups, 37 sit ups, run two miles in 16 minutes.

As a point of clarification, I mean actual prison for committing imprisonable offenses (insubordination and drug use), not that serving in the military is a prison sentence.

Yeah but if we don't have a draft then how will be win the battles in the Congo against East Asia??? Victory Gin for me thank you....