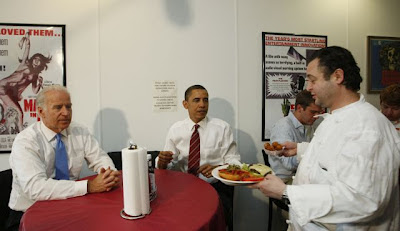 Another gotcha moment for the administration in a week that has been full of them.


A healthcare advocacy group run by physicians is preparing to file a petition calling on President Obama to stop eating hamburgers, hot dogs and other unhealthy foods before cameras.

"As role model to millions of Americans, the president has a responsibility to watch what he eats in public," said Susan Levin, nutrition education director with the Physicians Committee for Responsible Medicine (PCRM).

And in March, during a visit to Ohio with British Prime Minister David Cameron, he ate hot dogs while watching college basketball.

Levin said in a statement that processed meats like hot dogs "kill more Americans every year than tobacco does, and they cost taxpayers billions of dollars in healthcare."

She cited increasing rates of obesity in the United States. A study out this week projects that 42 percent of Americans will be obese by 2030.

"The White House would never set up a photo op showing the president buying cigarettes, so why is it OK to show him eating a hot dog?" she added.

Obama, an ex-smoker, kicked the habit in 2010, the first lady has said.

Despite Obama's taste for unhealthy foods, some media outlets have reported that the president appears to have lost weight since beginning his term.

Before we get to our narrative, allow us to state that the last paragraph there is simply idiotic as the stress of being the Commander-in-Chief will have far more to do with any weight loss/gain than the occasional burger run.

But putting aside any dietary deficiencies, what's better for the mind and soul than a cheese burger and an ice cold beer? Nothing.

We don't begrudge the President one bit for what we see as highly petty if necessarily life-affirming indulgences but we will note that the motivation behind this petition is the result of a nanny state mentality of which the President is both a product and a proponent.

If the federal government is going to shoe-horn us all into a one-size-fits-all healthcare scheme, then the man responsible for it should not chafe against some well-intended nagging from people whom, obviously, know better than us.

After all, it's for his/all our own good.

We'll have some thoughts on the President's (r)evolution regarding gay-marriage later.

ray's hell burger is to die for. if i was the pres i would be there every day.

I thought that was an Onion story. It's not. That is really very strange.