May 1st: Victims of Communism Day

Of course, May Day is the perfect day for this.

We have a familiar meme around here with respect to the 20th century and that is last century was not much more than serial and parallel failed experiments in statist/collecvist ideologies which produced historically unprecedented human misery. Communism (Fascism and Imperialism) lied and many, many people died.

Communism is the hands-down winner for the most deadly, deplorable and anti-human ideology of all-time. From the Volokh Conspiracy:

May Day began as a holiday for socialists and labor union activists, not just communists. But over time, the date was taken over by the Soviet Union and other communist regimes and used as a propaganda tool to prop up their regimes. I suggest that we instead use it as a day to commemorate those regimes’ millions of victims. The authoritative Black Book of Communism estimates the total at 80 to 100 million dead, greater than that caused by all other twentieth century tyrannies combined. We appropriately have a Holocaust Memorial Day. It is equally appropriate to commemorate the victims of the twentieth century’s other great totalitarian tyranny. And May Day is the most fitting day to do so. I suggest that May Day be turned into Victims of Communism Day….

The main alternative to May 1 is November 7, the anniversary of the communist coup in Russia. However, choosing that date might be interpreted as focusing exclusively on the Soviet Union, while ignoring the equally horrendous communist

And B-Daddy sees a definite correlation between May Day "celebrations" and similarly-themed horrible ideologies:


Meanwhile, I guess the Occupy movement will be protesting along with the rest of the communists tomorrow. It's always a sure sign that a movement has allied itself with the second most evil political philosophy in history when they choose May 1 as a day of national protest. I remember that the open borders/amnesty types did so a few years back. There is surely a political rule that all May day protests are in league with forces of darkness. The Occupy protestors had a single valid complaint buried beneath their socialist clap-trap, that some of the banksters had enriched themselves through federal largesse, either in the form of Federal Reserve pay outs or from the U.S. Treasury. As a tea partyer, I can be sympathetic to that complaint; but they piled on with so much socialist b.s. and they behaved in such an abhorrent manner that no one could take them seriously.

Go to the link where B-Daddy makes the case for inequality as in a truly fair society, people who work harder and demonstrate more initiative than others most certainly should benefit from that creating a natural and just inequality of material and property in that society.

For those of you who still have a soft-spot in your heart for the anti-capitalist and anti-freedom rhetoric and actions of the Occupy movement, check out the uncaptioned/unexplained picture below that is on the website of Anarchistnews.org 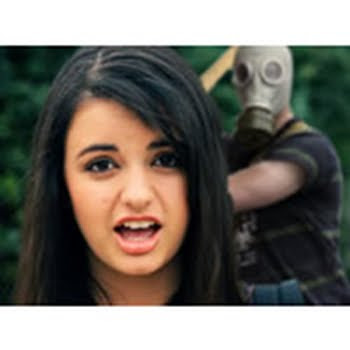 Who is the girl? Her name is Rebecca Black. She is 14. To our knowledge, she has taken no public political stances. Her crime? Making a self-produced song and video that went viral last year, blowing up all over the internet. For this, she is to be clubbed.


To end on a positive note, join us, The Volokh Conspiracy and many other web sites on the internet (liberal blog/web sites are more than welcome to join the party as well), in making May 1st Victims of Communism Day.

Why beat on Rebecca Black? She's just a little cutie who sang an inoffensive pop song. Maybe it was "Celebrate Violent Psychotic Day" at Occupy.

It's all about the diversity, man.

nice serving of crap on my birthday

Speaking of Memes... I saw that on Reddit last week... the guy with the bat was put on many different photos like the moon landing.

Black is a Meme now: